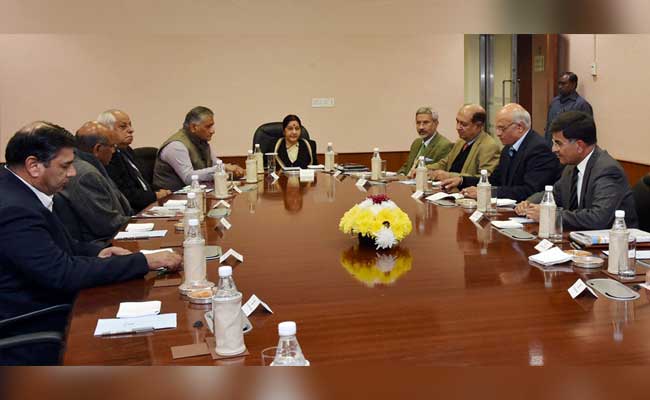 New Delhi: Foreign minister Sushma Swaraj met a group of diplomats today for what the ministry described as "diplomatic consultations on Pakistan strategy".

Sources said though scheduled earlier, the meeting acquired a new dimension after Saturday's terror attack at Pathankot, where, 40 hours on, security forces are still engaging the terrorists.

Government sources say the future of the dialogue will be decided in the next few days after a clear assessment of the Pathankot fallout and the extent to which the Pakistani establishment was involved.

With the attack coming days after Prime Minister Narendra Modi's unscheduled visit to Lahore, a debate is raging over the initiative to renew dialogue with Pakistan.

While PM Modi's visit was the first by an Indian Prime Minister to Pakistan in more than a decade, every such visit, or even an initiative to renew ties, has been followed by a terror attack.

Home Minister Rajnath Singh had said though India is keen on good ties with Pakistan, it will give a "fitting reply to terror attacks". His party, the BJP, said dialogues cannot be revoked due to "one attack" and accused Congress of "politicising" the Pathankote strike.

"You cannot change your neighbour, you can change friends and therefore we must continue with the talks but talks have to be mainly on the issue of terrorism and that's what exactly India is doing," Union Minister Prakash Javadekar has said.

Pakistan has condemned the attack. A statement from its foreign office said, "Building on the goodwill created during the recent high level contacts between the two countries, Pakistan remains committed to partner with India as well as other countries in the region to completely eradicate the menace of terrorism afflicting our region."