Karnataka cabinet: Although half the cabinet remains open for occupancy, a significant number is likely to go to Congress and Janata Dal Secular rebels who caused the collapse of the HD Kumaraswamy government. 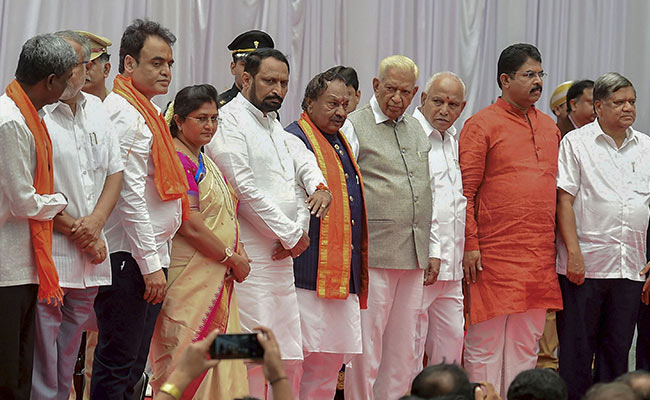 For BS Yediyurappa, the cabinet formation has turned into a tightrope walk

The induction of 17 new ministers into the Karnataka cabinet on Tuesday may have brought some relief to Chief Minister BS Yediyurappa, but it has also given rise to resentment among BJP MLAs who could not make the cut.

Chitradurga MLA Thippa Reddy was one of the first to question his omission shortly after the swearing-in ceremony. "I have been in politics from 1969. I have won six times from this constituency as an independent and later from the BJP. Whenever I won, it was with a thumping majority for the BJP. Nobody from my district has become a minister so far. There has been zero development in my district, I can say there has been no development at all," he said.

Supporters of BJP MLAs Balachander Jarkiholi, Umesh Katti and Goolihatti Shekar also expressed dissatisfaction over their omission from the cabinet.

BS Yediyurappa had to wait over three weeks for the cabinet list to be cleared by the party's high command, but half the berths remain vacant even now. The 17 new ministers, who are expected to be allotted portfolios in a day or two, were immediately sent to various districts of the state to oversee relief operations in the light of recent floods that claimed over 80 lives and displaced lakhs of people.

The BJP hopes that keeping half the cabinet empty would minimise dissent in the ranks. However, even then, the ones left out know that a few of these positions are likely reserved for disqualified MLAs from the Congress and Janata Dal Secular who caused the collapse of the previous HD Kumaraswamy government. "We have to leave some place for MLAs from the Congress and the Janata Dal Secular," confirmed Minister KS Eshwarappa.

The rebel MLAs have approached the Supreme Court against their disqualification by former Speaker KR Ramesh Kumar. While they are likely to be rewarded if they win, a loss in court would disqualify them from contesting the elections until 2023.

There has also been criticism about MLAs from the Old Mysuru region not being given ministerial berths. With the need to balance caste and regional equations as well as "reward" those seen to have played a big role in facilitating the BJP's rise to power again, the cabinet formation process is rapidly turning into one of the early challenges for the BS Yediyurappa government.