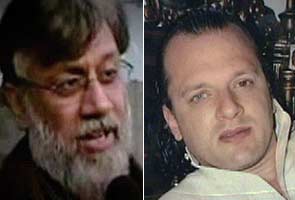 New Delhi: David Headley, a person of interest in the 2008 Mumbai attacks and who is currently in American custody, has been opposing his further interrogation by Indian investigators.

This was conveyed by Washington to New Delhi on Monday during the Indo-US strategic dialogue held in Delhi after India has consistently asked the US to give access to Headley for a second time to get more information about the November 2008 audacious attack.

The US interlocutors have cited Headley's plea bargain with the American authorities and indicated its difficulty in allowing Indian investigators to further question Headley who had carried out the recce of the 26/11 targets for the Pakistan-based terror outfit Lashkar-e-Taiba, official sources said.

However, India may be allowed to question Headley's accomplice Tahawwur Hussain Rana who helped his childhood friend to do the recce of targets for the 26/11 attacks.

Indian investigators believe that if they could quiz Pakistani-Canadian Rana, more information could come to light as he was allegedly a close associate of his Pakistani-American friend Headley.

A court in the US had sentenced 52-year-old Rana to 14 years in jail followed by five years of supervised release.

Rana was convicted for providing material support to LeT and for backing a "dastardly" plot to attack a  Danish newspaper but not convicted for the Mumbai terror attack despite being a close associate of Headley.

The investigators believe that Headley and Rana have a lot of information and their interrogations could throw more light on the conspiracy hatched to carry out the worst terror strike in India and role of those behind it.

Indian investigators have already questioned Headley once in 2010.

Headley had pleaded guilty to 12 terrorism charges, including his involvement in the November 2008 terror attacks in Mumbai that claimed 166 lives. He however, struck a plea bargain with US authorities.

Promoted
Listen to the latest songs, only on JioSaavn.com
Asked whether the US will give India access to Headley and Rana, Mr Swartz said "we will continue to cooperate in Mumbai attack".