Amit Shah on Tuesday said the Citizenship Amendment Act will not be withdrawn come what may. 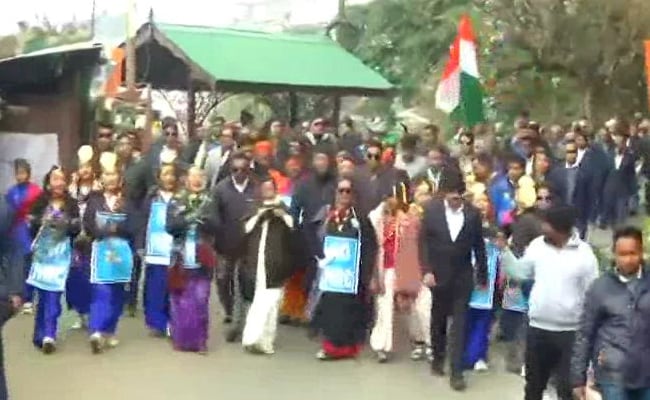 Mamata Banerjee took out an anti-CAA protest march in Darjeeling.

West Bengal Chief Minister Mamata Banerjee on Wednesday reiterated that the National Register of Citizens (NRC), National Population Register (NPR) and Citizenship Amendment Act (CAA) will not be implemented in the state. Attacking the centre at a rally in Darjeeling, she asked Union Home Minister Amit Shah to clarify whether a person would be declared foreigner before being allowed to apply for citizenship under the law. She also cast doubts on the centre's intention behind asking for the date and place of birth of parents in the NPR exercise.

"Every day the Union home minister is giving new sermons. Yesterday he said that we (opposition parties) are misleading the people. I would like to ask him to clarify whether a person will be declared foreigner and then allowed to apply for citizenship under the CAA," Ms Banerjee was quoted by news agency PTI as saying at the rally.

Mr Shah on Tuesday said the citizenship law will not be withdrawn come what may.

"The centre is saying that there is no need for documents for NPR, then why are they asking about date and place of birth of parents. The Centre is actually planning to make two lists - one for those who would submit documents and another for those who wouldn't," she added.

Referring to the police crackdowns on anti-CAA protests in several cities, she said the government was trying to make people "fearful". "To hide from this situation (economic slowdown), they are creating this situation," she said.

The CAA for the first time in India makes religion a criterion for citizenship. The government says the Citizenship Amendment Act will help expedite the grant of citizenship to non-Muslim minorities from Pakistan, Afghanistan and Bangladesh who came to India due to religious persecution and settled here before 2015.

Critics say they fear the law discriminates against Muslims and violates the secular principles of the constitution.

Violent protests had broken out against the law and NRC in several parts of the countries, leading to deaths in Uttar Pradesh, Karnataka and Assam. The government had later said there had been no discussion on the nationwide NRC.