Her remarks calling the protests "conspiracy" drew a derisive response from BJP chief Amit Shah, who said she saw "conspiracy in everything". 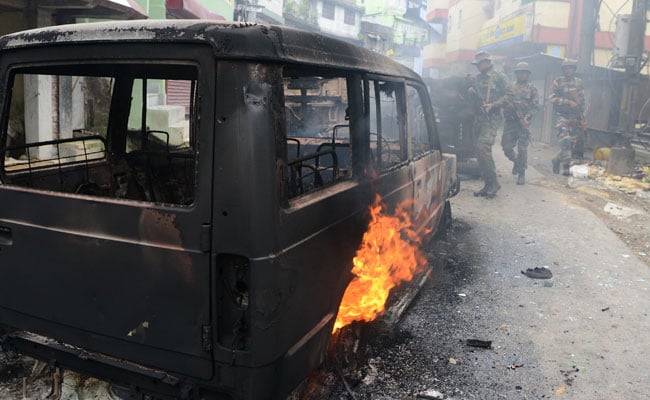 Mamata Banerjee requested Centre to not to encourage the protesters in Darjeeling. (AFP Photo)

Mumbai/Kolkata: Amid the fresh agitation for Gorkhaland in the Darjeeling hills, West Bengal Chief Minister Mamata Banerjee today accused the Modi government of encouraging the stir and claimed there was a "deep-rooted conspiracy" behind it. She, however, did not directly blame the Bharatiya Janata Party or BJP for the violent agitation, which she claimed was supported by insurgent groups of the northeast and some foreign countries. Her remarks drew a derisive response from BJP chief Amit Shah, who said she saw "conspiracy in everything".

Ms Banerjee said the kind of "hooliganism and vandalism," being seen during the unrest in the hills, can only be done if there is a "terrorist brain" behind it, and the Centre should extend full help to the state to contain it.

"What is happening today is a deep-rooted conspiracy. So many bombs and arms cannot be gathered in a day... These have been gathered for a long time.

"From where are they (GJM) are getting their support? Their advantage is it (Darjeeling) is a hill area and there are borders with other states and international borders.

"They are using the national flag for vandalism, which they cannot do. I will request the Central government not to encourage them to behave like this. If anything happens to any foreigner (tourist) it will bring bad name to the country," Ms Banerjee said.

"Only a terrorist and not a common man can do this. We have clues that this has terrorist connections. They (GJM) have connections with underground insurgent groups of the northeast ... I request them (insurgent groups) not to extend any support to the GJM," Ms Banerjee told reporters in Kolkata.

She said the GJM was being helped by some other countries too but did not elaborate.

Responding to the charge, BJP chief Amit Shah took potshots at Ms Banerjee in Mumbai, saying she smelt "conspiracy in everything".

"Mamata sees conspiracy in everything. She had made similar allegations against the Indian Army as well," Mr Shah responded when asked about Ms Banerjee dubbing the ongoing agitation in Darjeeling "a deep-rooted conspiracy".

Gorkha Janmukti Morcha (GJM), which controls the Gorkhaland Territorial Administration (GTA) is an ally of BJP whose SS Ahluwalia represents Darjeeling in the Lok Sabha.

When asked about Mr Ahluwalia backing the agitation and whether BJP supported it, Mr Shah said, "It is true that we are in favour of small states. Once we decide something about it, we will announce it." He, however, did not say if the party wanted a separate state of Gorkhaland carved out of West Bengal.

Promoted
Listen to the latest songs, only on JioSaavn.com
Mr Thackeray has been consistently opposing the demand for formation of a separate Vidarbha state carved out of Maharashtra. The current Chief Minister Devendra Fadnavis had also backed it when his party was in the opposition.

(This story has not been edited by NDTV staff and is auto-generated from a syndicated feed.)
Comments
Mamata BanerjeeDarjeeling protestsAmit Shah