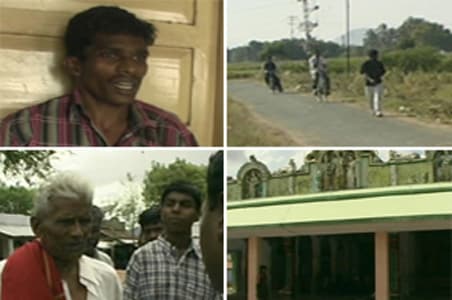 Dindigul, Tamil Nadu: Even after 60 years of Independence, there still exists a side of India that is hard to believe. A Dalit man in Tamil Nadu was forced to eat human excreta because he wore slippers in the presence of upper caste people.

"They said hereafter no one should come in wearing slippers. Arokiasamy told Anbu to put human excreta into my mouth. They hit me severely on my abdomen and shoved it into my mouth," said the victim Sadayandi.

"Even men who come by cycle have to get down and push it into the village," said his wife Nagajothi.

The police took more than a week to file the First Information Report (FIR) under the Prevention of Atrocities Act. And even after that, they were not willing to book the accused. Instead, they want the victim - who is in hiding because of fear - to prove that the crime occurred.

"If this has happened he has to come forward to give some clues and explain about the incident. Only then I can go deep into this matter," said the Deputy Superintendent of Police.

The Madras High Court has now asked for an action taken report.

Promoted
Listen to the latest songs, only on JioSaavn.com
A few years ago, NDTV had exposed atrocities against Dalits in the state. In many areas they are forced to remove footwear before entering the village, walls deny them access, thorny fences greet them in fields they use as toilets. Even elected Panchayat leaders are forced to quit. Thanks to vote bank politics successive governments seem to have only gone soft on dominant communities.

Politically, Dalits are a divided lot in Tamil Nadu. While the state pampers them with welfare schemes, its tacit support to human rights violations by powerful dominant communities is only making things worse.