PM Modi and Mamata Banerjee last met on January 23, at the Victoria Memorial in Kolkata (File)

Prime Minister Narendra Modi had a 15-minute meeting with Chief Minister Mamata Banerjee at Kalaikunda Air Base in Bengal's West Midnapore district Friday. The two were to hold a review meeting to assess damage from Cyclone Yaas - which hit Bengal and Odisha this week - but Ms Banerjee skipped that, leaving after giving PM Modi a damage report.

She later said she told the Prime Minister "you came far to meet me... so I came to meet you".

"I told him - 'You came far to meet me. You wanted to meet me, so I came. My Chief Secretary and I, we are submitting this report to you. I now have to go to Digha as per my schedule. So I am taking your leave'," Ms Banerjee told reporters at Digha, one of the districts most badly affected by Yaas.

"Now I am here... where we are holding our administrative review meeting. Tomorrow we will conduct an aerial survey (of affected regions)," she added.

That 15-minute meeting was their first since the April-May Assembly election that Ms Banerjee's Trinamool won, despite the opposition mounting a crass campaign fueled, in part, by the resignation of a large number of MPs, MLAs and ministers from the ruling party.

The last time they were face-to-face was on January 23 - at Kolkata's Victoria Memorial to mark the 125th birth anniversary of Netaji Subhash Chandra Bose. On that evening a furious Mamata Banerjee walked off-stage in a huff after her speech was interrupted with chants of "Jai Shri Ram".

Bengal governor Jagdeep Dhankhar, who has a running feud with Ms Banerjee, and Leader of the Opposition Suvendu Adhikari, her trusted aide before he joined the BJP, were at the meet she skipped.

Mr Dhankhar later took a swipe at Ms Banerjee over her skipping the meeting, saying it was "not in sync with constitutionalism or rule of law".

It would have served interests of state and its people for CM and officials @MamataOfficial to attend Review Meet by PM.

Non participation by CM and officials not in sync with constitutionalism or rule of law.

The Prime Minister also took aerial surveys of regions affected by Yaas, which caused havoc across South and North 24 Paraganas, Digha, East Medinipur and Nandigram districts of the state.

PM @narendramodi undertook an aerial survey to review the situation in the wake of Cyclone Yaas.

He later announced Rs 1,000 crore for relief measures. Rs 500 crore is to be given immediately to Odisha, with equal sums for Bengal and Jharkhand. These will be released on the basis of damage.

He also announced Rs 2 lakh each for the families of each of those who died in cyclone-related incidents. A sum of Rs 50,000 would be paid to those injured in such incidents.

Last week he announced Rs 1,000 crore for Gujarat, after the state was hit by Cyclone Tauktae.

Ms Banerjee said she would undertake her own surveys on Saturday.

She has pegged the damage to her state at Rs 15,000 crore - including the destruction of three lakh houses and 134 embankments - and has already announced a rescue package of Rs 1,000 crore. 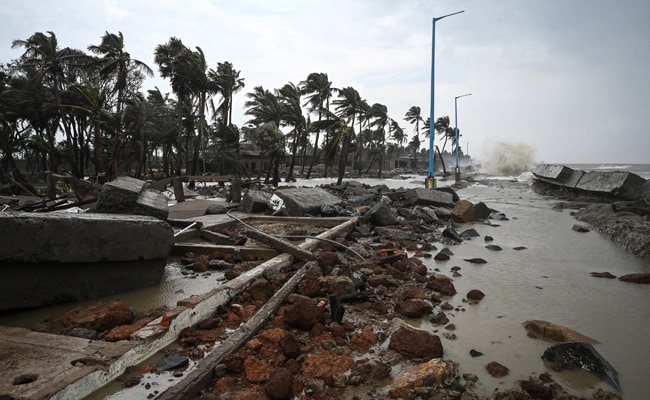 Cyclone Yaas tore through Bengal and Odisha this week, causing damage worth thousands of crores

The Prime Minister has already met Odisha Chief Minister Naveen Patnaik; the two met in Bhubaneswar this morning, after which he conducted an aerial survey in that state.

Mr Patnaik thanked the Prime Minister for visiting the state and said he had informed him of the "large-scale devastation" caused by Cyclone Yaas.

Thank you Hon'ble PM @narendramodi ji for visiting #Odisha in the aftermath of #CycloneYaas. Apprised him about the large scale devastation caused by the cyclone and steps taken by the State Govt ahead of the cyclone and the ongoing restoration efforts. #OdishaFightsYaaspic.twitter.com/RG1dQpLcp0

PM Modi issued a statement after his meeting with Mr Patnaik, in which he noted the effective role of central and states agencies in responding to the challenge posed by Yaas.

He advised all agencies to ensure the restoration of normal life in the affected areas as soon as possible and asked that relief material is disbursed to all persons affected by the cyclone.

Reviewed the situation arising due to Cyclone Yaas. Discussed the preparedness, relief and rehabilitation efforts as well as other aspects. https://t.co/fkxtVZuGQw

Yaas made landfall on the north Odisha coast - about 20 km south of Balasore - on Wednesday with 130-140 km per hour winds and 150 km per hour gusts.

At least three people died as Yaas hit Odisha. A fourth person died in Bengal's Digha town. Over 100 NDRF teams have been deployed across both states to help in rescue and relief efforts.