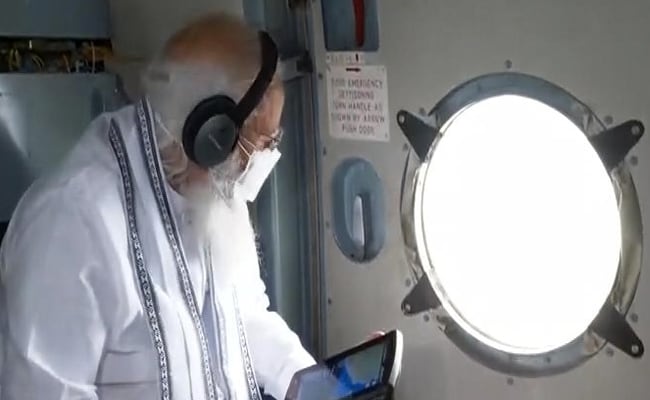 PM Modi boarded a helicopter for the aerial survey of cyclone-affected areas in Gujarat and Diu.

Prime Minister Narendra Modi today announced an assistance of Rs 1,000 crore for immediate relief work in Gujarat, which has been hit hard by Cyclone Tauktae.

He also announced compensation of 2 lakh each for the families of each of those who died in cyclone-related incidents across several states. A sum of 50,000 would be paid to those injured in such incidents.

Prime Minister Narendra Modi on Wednesday undertook an aerial survey of affected areas in Gujarat and adjoining Union territory of Diu to assess the devastation caused by Cyclone Tauktae. PM Modi is in Gujarat to review the situation in the state in the aftermath of cyclone Tauktae. He landed at Bhavnagar from Delhi and proceeded for the aerial survey of Una, Diu, Jafarabad and Mahuva, an official said.

PM Modi boarded a helicopter for the aerial survey of cyclone-affected areas in Gir-Somnath, Bhavnagar and Amreli district of Gujarat along with Diu.

The cyclone, which made landfall between Diu and Una town of Gir-Somnath district on Monday night, caused major property damage and also uprooted trees in that region. After the survey, the PM is scheduled to hold a review meeting at Ahmedabad.

After causing widespread rain in Gujarat, the cyclone is expected to bring showers in many other states also, including Rajasthan, Uttarakhand, Himachal Pradesh, Uttar Pradesh and Delhi, due to its interaction with the western disturbance, the IMD said. "The remnant of the system is very likely to move further north eastwards across Rajasthan to west Uttar Pradesh during the next two days," it said.

Gujarat Chief Minister Vijay Rupani said that despite such a high-intensity cyclone hitting the state, his government managed to prevent any major loss to life or property as over two lakh people were already shifted to safer places.

Here are the LIVE Updates on Cyclone Tauktae:

The PM is conducting an aerial survey of areas such as Una, Diu, Jafarabad, and Mahuva today. He will also hold a review meeting in Ahmedabad later. pic.twitter.com/B3C4qamBwp

The PM is conducting an aerial survey of areas such as Una, Diu, Jafarabad, and Mahuva today. He will also hold a review meeting in Ahmedabad later. pic.twitter.com/fJMJFDZJsf

Honourable Prime Minister Shri @narendramodi ji landed in Bhavnagar. He will conduct an aerial survey of the areas of Amreli, Gir Somnath and Bhavnagar districts hit by #CycloneTauktae. pic.twitter.com/VcBk6lwbau

Gujarat: Locals in Amreli rescued parrots & other birds as trees uprooted due to heavy rain & wind as a result of #CycloneTauktae

A local says, "They were kept here in Police lines & provided medical help, food & water. They were released in the evening when situation improved" pic.twitter.com/GIgCgpQedl

#WATCH | A crew member of Barge P305 breaks down while speaking of Indian Navy's rescue operations. He was rescued by INS Kochi and brought to Mumbai.

A total of 184 people have been rescued so far, search and rescue operations are still going on.#CycloneTauktaepic.twitter.com/7e8JU3zcT5

Had inputs that Barge P305 was in distress, approx 35-40 miles from Mumbai. The ship sailed under very difficult conditions, storm was passing just passing west of Mumbai. As we arrived on scene we took charge of the situation: Capt Sachin Sequeira, Commanding Officer, INS Kochi pic.twitter.com/oI8GolQIEw

NDRF personnel carry out road clearance and restoration work in Diu in the aftermath of #CycloneTauktaepic.twitter.com/ukmL4ZAARO