Cyclone Phailin: Why should you grudge if I give credit to UPA, says minister Jaipal Reddy 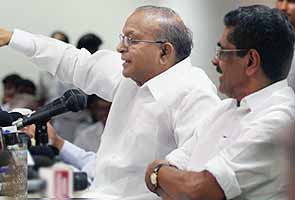 New Delhi: The Congress seemed to take credit today for the effective handling of the situation after cyclone Phailin struck, when Science and Technology Minister S Jaipal Reddy used a party platform to highlight the role of central agencies in accurately predicting the cyclone's path and force and evacuating lakhs in Odisha and Andhra Pradesh before the monster storm struck on the weekend.

Beside him, M Ramachandran, the Minister of State for Home, said the government was working towards making the country "disaster resilient."

When asked why he was addressing a government press conference at the Congress headquarters, Mr Reddy said, "None of us can be 'sanyasi'. Why should you grudge if I give credit to UPA. Most of the investment in IMD equipment was made during the UPA rule".

The BJP has taken umbrage. "They are taking credit by the looks of it. Don't know why Jaipal Reddy addressed from a Congress platform... It's not a question of investments during Congress governance paying off," said BJP spokesperson Prakash Javadekar, pointing out that the BJP-led  Atal Bihari Vajpayee government had set up the National Disaster Management system or NDMA.

Promoted
Listen to the latest songs, only on JioSaavn.com
Mr Reddy attempted to side-step many questions on if the Congress and the government it leads would also take the blame for the failure to effectively handle the massive human tragedy in Uttarakhand due to heavy rains in June.

He made only a passing reference to the Odisha government's role in the effective management of the cyclone and when asked a pointed question said, "I do not want to make any political point. IMD was making prediction after prediction for four days. NDMA, state governments like Odisha did their job. Evacuation of one million people is a record in itself."
Comments
Cyclone Phailin