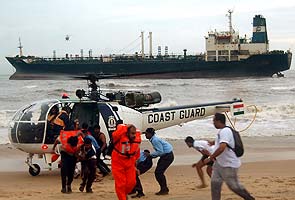 Chennai: The bodies of two sailors of the ship MT Pratibha Cauvery, which was grounded by cyclone Nilam, have been found near Chennai today. The two were part of the five crew members who went missing on Wednesday after a lifeboat they were using to leave the ship capsized. The bodies of three of their colleagues were found yesterday.

The body of one of the sailors was washed ashore near the Chennai harbour on Wednesday while the other was found near Adyar Estuary. Another body was found at sea later in the afternoon. All the bodies are yet to be identified.

The ship had run aground near the Besant Nagar beach in Chennai on Wednesday. While 16 managed to escape from the ship that had 37 crew members on board, one drowned while five others went missing.

Coast Guard helicopters had on Thursday rescued 15 more sailors who were trapped in the ship. The initial rescue operations on the day of the cyclone were carried out by fishermen.

When the cyclone made its landfall, the ship's captain had sent out a distress call, but got no response. The Coast Guard and the Tamil Nadu government's Coastal Security Group were unable to launch rescue operations immediately; they said the gusty winds and bad weather didn't allow it.

Promoted
Listen to the latest songs, only on JioSaavn.com
A Coast Guard official had said: "We do not monitor ships at ports, not even on a cyclone day. We rescue only when there is a call."

Chennai Port officials said the ship's captain had ignored instructions to leave for safe waters following the cyclone alert.But the family of one of the sailors who died while trying to abandon the ship has filed a petition in court alleging that the vessel was not sea-worthy and had no food or fuel on board. The family has also demanded an interim compensation of Rs. 25 lakh and an eventual payment of Rs. 1 crore in its petition. Following this petition, the Madras High Court yesterday ordered that the ship not be moved from its current location, off the Besant Nagar beach. An emergency tow vehicle though is on its way to Chennai to pull out the ship when it can. (Read)