Over three lakh people who have been literally forced onto the streets across Tamil Nadu's Nagapattinam, Tiruvarur, Thanjavur and Pudukottai districts.

A man sits on the remains of his house, razed by the Cyclone Gaja, in Tamil Nadu.

A hut was all that 50-year-old Farida and her husband had to their name until the Cyclone Gaja blew it away. Today, they squat with their grandchildren near the remains of what was once their home, trying to halt passing vehicles in the hope of getting something to eat.

Farida says she doesn't even have a change of clothing. "We need a house; we need that to at least make some food. Build us a house, please," she mumbles.

They, however, are just but a few among the over three lakh people who have been literally forced onto the streets across Tamil Nadu's Nagapattinam, Tiruvarur, Thanjavur and Pudukottai districts.

R Gunasekaran, a resident of Vizhunthamavadi in Nagapattinam, watched helplessly as all his 40-year-old high-yielding coconut trees tumbled to the ground in the raging winds. A part of his ramshackle house also crumbled, and they now live in fear of a roof collapse. 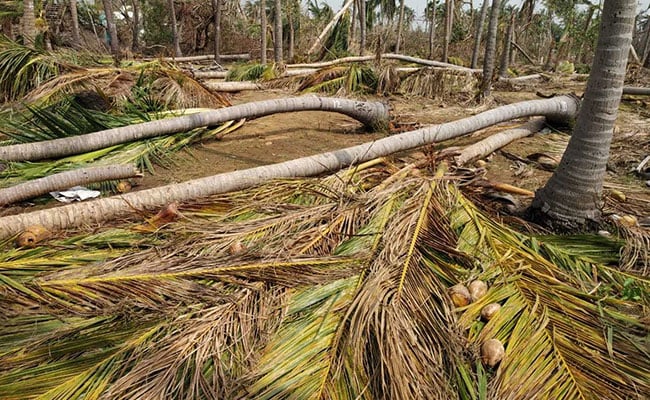 The cyclone has uprooted an estimated 11 lakh trees across the state, leaving stories of horror and desolation in its wake.

But it's the sight of Gunasekaran's fallen trees that moves him to tears. "If I start now, it will take me 20 years to raise trees like these. Even if I planted saplings now, it will be 10 years before they start yielding well. What do we do until then?" he asks.

There are many other farmers with similar questions. The cyclone has uprooted an estimated 11 lakh trees across the state, leaving stories of horror and desolation in its wake.

The residents of Vellpallam, a fishing hamlet, have a similar reason to mourn. The Cyclone Gaja has wrecked around 300 boats, turning the beach into a veritable dumpyard of broken planks and leaving them with nothing to pursue their livelihood. Although nobody died this time, they say their current losses easily dwarf that of the 2004 tsunami.

"We managed to save at least 20% of our boats when the tsunami struck, but Gaja has destroyed most of them. The only difference is that we are all safe, and we thank the government for that," says Thanga Vel, a local leader.

The Tamil Nadu government has announced the construction of one lakh concrete houses for people who have lost their homes, and sought Rs 15,000 crore from the centre in aid. Health secretary Dr J Radhakrishnan said the government is working on a war footing to provide relief and rehabilitation. "The chief minister has appointed 15 teams of senior IAS officers to oversee the operations. We will work 24x7 until normalcy is restored," he added.