All flights from Bhubaneswar had been cancelled from midnight as the cyclone was to make landfall today morning. 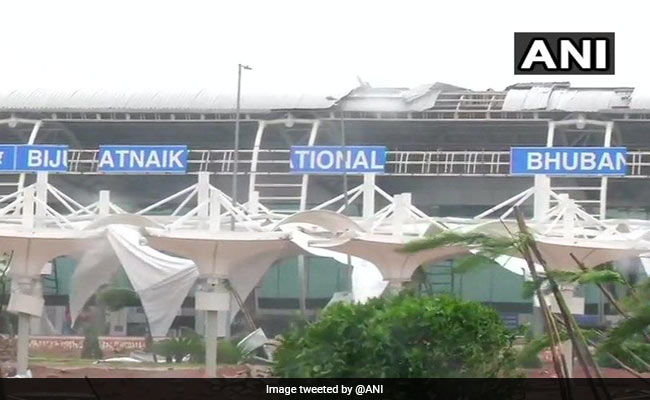 Cyclone Fani: There was damage to the roof of the Biju Patnaik International Airport as well

The Biju Patnaik International Airport in Odisha capital Bhubaneswar became a victim of the monster winds of Cyclone Fani which battered Odisha today.

Pictures shared by news agency ANI show extensive damage to the airport. Even parts of the hoarding of the name of the airport seemed to have been blown away.

There was damage to the roof of the airport as well and the trees were affected too.

Waterproof sheds had also come down in the deserted airport that has been shut down for the "extremely severe cyclone".

All flights from Bhubaneswar had been cancelled from midnight as the cyclone was to make landfall today morning. Nearly 160 trains have been called and flights have been stopped from Bhubaneswar and Kolkata. Fani has now gradually weakened and is moving towards Bengal. Flight operations will resume at 1pm tomorrow in Bhubaneswar.

Cyclone Fani pummeled through Bhubaneswar and Puri causing extreme damage to canopy and even buildings. The cyclone has claimed eight lives and injured over 160 in the state.

A 250-foot crane crashed onto a building in the state and the hostel roof of AIIMS Bhubaneswar was ripped off due to gusty winds.

Many people in Bhubaneswar went down to the streets; some said their houses were shaking. Bystanders reportedly saw tin roofs, car doors and even motorcycles being blown away as the worst storm in 20 years crossed the state.

Over 11 lakh people have been evacuated in Odisha and hundreds of ambulances are on standby. The Army, Navy, Air Force, Coast Guard and disaster management agencies are also ready for an eventuality.

Fani is the strongest cyclonic storm since the Super Cyclone of 1999, which left nearly 10,000 dead.