Cyclone Amphan: PM Modi also announced Rs 2 lakh each for the families of those who died in the cyclone in West Bengal and Rs 50,000 for the injured.

Prime Minister Narendra Modi this afternoon announced a Rs 1,000 crore "advance interim assistance" for West Bengal after he undertook an aerial survey of the areas ravaged by Cyclone Amphan that has killed 80 people in the state. PM Modi, who was accompanied by Bengal Chief Minister Mamata Banerjee and Governor Jagdeep Dhankhar on the helicopter, assured the centre's full support for Bengal.

"Rs. 1,000 crore advance assurance will be given to West Bengal," PM Modi said in Basirhat on North 24 Parganas district, after the aerial survey. "All aspects relating to rehabilitation, reconstruction will be addressed. We all want West Bengal to move ahead. The centre will always stand with West Bengal in these testing times. We will work together to ensure that Bengal stands on its feet again," he said.

Mamata Banerjee was seated some distance away from PM Modi during his briefing.

While the Prime Minister used a scarf as a mask during his visit, the Chief Minister and the Governor were seen in face masks as they took stock of the situation and looked down at the cyclone-hit areas from their helicopter.

Ms Banerjee and Governor Dhankhar had received PM Modi at the airport in Kolkata shortly before 11 am. The cyclone swept through several parts of Bengal, including capital Kolkata on Wednesday, leaving behind a trail of destruction, with thousands of homes damaged, and trees and electric poles uprooted.

PM Modi also announced Rs 2 lakh each for the families of those who died in the cyclone in Bengal and Rs 50,000 for the injured. "I am here to assure everyone in Bengal that in this time of crisis you will find the central government fully there standing beside you shoulder to shoulder," he said.

After her meeting with PM Modi, Mamata Banerjee said West Bengal has suffered losses to the tune of Rs 1 lakh crore due to Cyclone Amphan. "In this hour of crisis, we all must work together. I have told PM Modi in detail about post-cyclone situation in Bengal," she said. 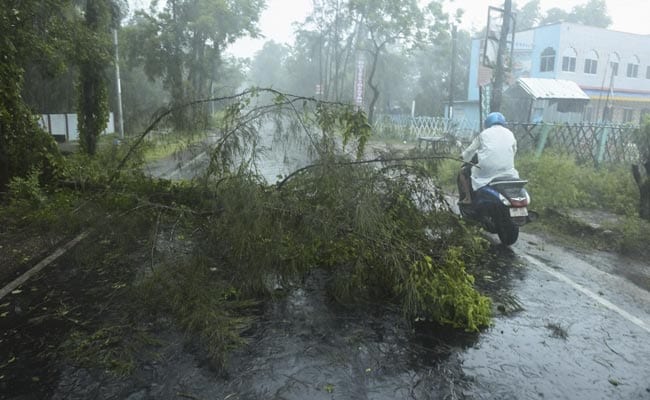 Cyclone Amphan swept through several parts of Bengal, including capital Kolkata on Wednesday.

Ms Banerjee had asked the Prime Minister to visit the state and inspect the damage, which she said was in the tune of Rs 1 lakh crore.

At the same time, there has been damage to property, which we reviewed in a meeting today.

All possible assistance will be provided by the Centre to ensure quick relief work.

Rs. 500 crore will be given to Odisha as advance assistance: PM @narendramodi in Odisha

Ahead of PM Modi's visit, Odisha Chief Minister Naveen Patnaik spoke with Ms Banerjee today and assured all possible support to overcome the crisis triggered by the cyclone.

The cyclone also caused widespread devastation in Odisha, damaging power and telecom infrastructure in several coastal districts. Officials of the Odisha government estimated that it has affected around 44.8 lakh people in the state.

This is PM Modi's first travel outside Delhi in nearly three months as he remained in Delhi because of the nationwide lockdown necessitated by the coronavirus pandemic.

PM Modi had last travelled to Prayagraj and Chitrakoot in Uttar Pradesh on Febraury 29. It is after 83 days that the Prime Minister will be stepping out of the capital, to Bengal and Odisha.

This was the second visit of the Prime Minister to West Bengal this year.