A police official said the landslide had struck the highway near Mehar, one km from Ramban town towards Chanderkote. 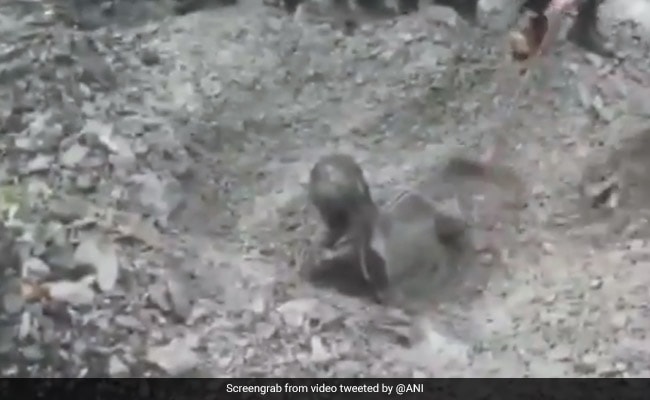 A man trapped under the debris of a landslide was rescued after a dog of the Central Reserve Police Force or CRPF, accompanying a bomb disposal squad, alerted the force along the Jammu-Srinagar National Highway in Ramban district of Jammu and Kashmir, an officer said on Wednesday.

Following the cue from the dog, the troops began searching and found the man trapped in the debris of the landslide which had occurred the previous night.

#WATCH CRPF personnel of 72nd Battalion rescue a man trapped in landslide on Jammu-Srinagar highway near milestone 147. On following cue from CRPF dog, the troops found a man trapped in debris of the landslide which had occurred last night. The man has been admitted to hospital. pic.twitter.com/JFBP7agak0

"Seeing a life at risk, the troops reached the spot and alerted E/239 Battalion of the force deployed in the nearby area. Wasting no time, company commander, Inspector N N Murmu reached the spot along with his men and started rescuing the trapped man," the officer said.

"Kumar is being administered medical aid, but is currently unable to speak due to the shock of the incident," he said.

A police official said the landslide had struck the highway near Mehar, one km from Ramban town towards Chanderkote.

The rescued man is mentally unsound and used to roam the highway, he said. Meanwhile, a video of the rescue operation went viral on social media with people praising the effort and dedication of the security forces in rescuing the trapped civilian.

Multiple landslides hit the 270-km highway at several places in Ramban and Udhampur districts following heavy overnight rains, forcing closure of the only all-weather road linking Kashmir with rest of the country.

The closure of the highway also led to the suspension of the ongoing Amarnath yatra from Jammu for the day, while efforts are on to restore the highway, officials added.