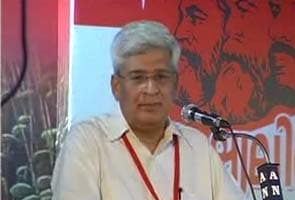 Kozhikode: They were routed in the general elections of 2009. They lost West Bengal and Kerala last year. And this March, in the Assembly polls, they couldn't win a single seat. This is the reality before the CPM today as it begins its 20th party Congress in Kozhikode.

On the eve of the event, there were celebrations on the beach, with fireworks and flag hoisting turning the skyline red. But for six days starting today, party delegates from across the country will brainstorm at mostly closed door sessions to chalk their future path and finalise three resolutions that will guide the party in the coming years - the political, the organisational and the ideological resolutions.

As many as 734 delegates, 70 observers and 11 senior party leaders will participate in the Congress, which will be inaugurated by CPM General Secretary Prakash Karat.

"What we have learnt from the socialism of 20th century is to carry forward, take up what is valuable and what is essential and discard the errors and some compulsions of that situation which led to certain practises of building socialism which we cannot carry forward," Mr Karat said yesterday.

Biman Bose would, however, not confirm if Buddhadeb wanted to withdraw from the party's two highest Politburo and Central Committee.

Promoted
Listen to the latest songs, only on JioSaavn.com
The six-day Congress is being held in Kerala for the fourth time. A public conference is scheduled on the concluding day on Apr 9.