The shramik train started from Nashik on Saturday morning and arrived in Lucknow via Jhansi and Kanpur. 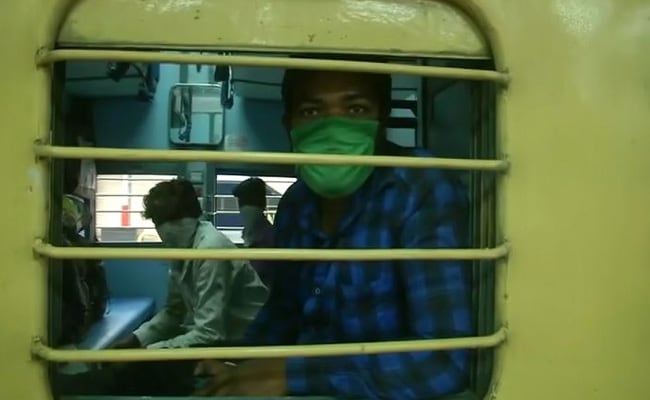 This is the first shramik train to arrive in Uttar Pradesh with stranded migrant workers.

Over 800 stranded workers native of Uttar Pradesh arrived in Lucknow in a special train from Maharashtra's Nashik on Sunday morning amid the ongoing lockdown.

This is the first special train to arrive in Uttar Pradesh with stranded migrant workers.

The special train started from Nashik on Saturday morning and reached Lucknow via Jhansi and Kanpur.

The railways had said that according to Union Home Ministry's guidelines it will start "Shramik Special" trains to move migrant workers, pilgrims, tourists, students and other persons stranded in various parts of the country due to the lockdown which came into force from March 25.

The first such train left for Jharkhand from Hyderabad on Friday.

The railways had announced six "Shramik Special" trains -- Lingampally to Hatia, Nasik to Lucknow, Aluva to Bhubaneswar, Nasik to Bhopal, Jaipur to Patna and Kota to Hatia.

While briefing reporters on Saturday, UP's Additional Chief Secretary (Home and Information) Awanish Awasthi had said the condition for bringing migrant workers back is that the states they are coming from should provide details of the workers along with a certificate that they have been properly screened and are healthy.

Uttar Pradesh Chief Minister Yogi Adityanath had issued directions to stop all kinds of illegal inter district and inter-state movements and ordered officials to list the names, addresses, mobile numbers and job skills of workers returning to the state.

On Friday, around 5,000 UP migrant labourers stranded in Madhya Pradesh returned in 155 buses, while around 1,341 labourers hailing from MP were sent back home from Uttar Pradesh.

The migrant workers stranded in Uttarakhand (1,500) and Rajasthan (6,500) are also returning to UP.

Yogi Adityanath had written a letter to his counterparts in Madhya Pradesh, Punjab, Uttarakhand, Odisha, Gujarat, Himachal Pradesh, Maharashtra, Delhi and Rajasthan, asking for the details of migrant workers stranded due to the lockdown.