26 Jharkhand Migrant Workers Brought Home After Getting Stranded In Nepal

The migrant workers hailing from Dumka district had appealed to the government for rescue, saying they were unwell and held up in Sindhupalchok district of Nepal. 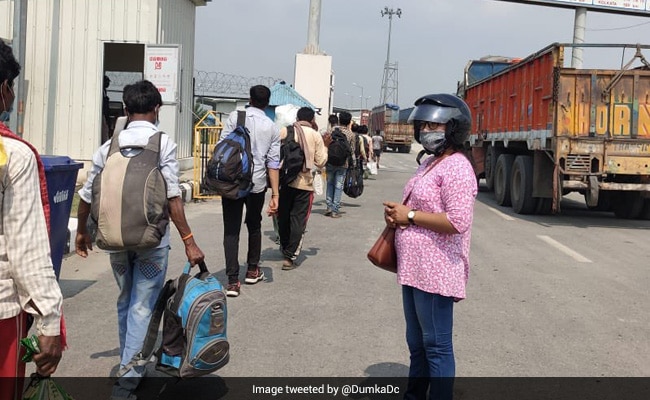 The workers from Jharkhand were engaged in a project in Nepal by Larsen & Tourbro.

Twenty-six Jharkhand migrant workers stuck in Nepal due to COVID-induced lockdown there on Saturday reached India-Nepal border and boarded a bus for their home in Dumka, a top official said.

These migrant workers from Jharkhand, engaged in a project in Nepal by Larsen & Tourbro, through a contractor, had been stranded due to lockdown in the Himalayan country to rein in coronavirus surge and had been sending SOS messages including video messages to the Jharkhand government for rescue.

"RAT kits, dry ration, oxygen cylinder equipped ambulance have all been sent from Dumka," said Deputy Commissioner Dumka, Rajeshwari B, who had flagged off a bus from Indoor stadium to Nepal border alongwith officials for the ferrying workers Friday.

"We are sitting in a bus sent by the Jharkhand government. We have been provided food.Apart from Subh Sandesh Foundation, Indian Youth Association, Nepal too helped us besides Chief Minister Hemant Soren, legislator Basant Soren and DC among others.Nepal people also helped us including media persons ...," Narayan Das, a migrant worker, said in a video message.

The migrant workers hailing from Dumka district had appealed to the government for rescue, saying they were unwell and held up in Sindhupalchok district of Nepal.

"A prompt action was initiated for the return of migrant 26 workers stuck in Nepal at the instance of chief minister Hemant Soren. The state government took up the issue with the Nepal government.

"As a result of the initiatives, the workers will be returning to Jharkhand on Saturday," a state government official had said.

Mr Sarangi said members of Janata Samajwadi Party Nepal helped in locating the workers and also in their return back home.

Chief Minister's office said a bus and an ambulance were rushed to the Indo-Nepal border to bring back workers.

Approval from Nepal government had already been sought for this, the official added.

On their return, the workers will undergo health check and COVID tests, the official said.

The Jharkhand government has imposed lockdown-like restrictions that mandate compulsory seven-day quarantine for people coming to the state.

The workers will be brought to Dumka's indoor stadium first.

A Larsen & Toubro spokesperson confirmed that the workers were engaged by the company at a project site through a contractor.

Chief minister Soren had on Thursday retweeted a message by a non-profit body Shubh Sandesh Foundation: "Doing our best to assist 26 Jharkhand migrants stuck in Nepal. Our friends in Nepal are in touch coordinating food, travel pass, medicine etc for them."

Earlier, former legislator Sarangi Mr had tweeted: "I sincerely request @DrSJaishankar Sir & @IndiaInNepal to get it looked into. These poor migrant labourers from Jharkhand are stuck in Nepal and they are very unwell. Pls rescue them."

In earlier video messages the migrant workers were seen appealing to the Jharkhand government to rescue them while saying that they are stranded in Nepal due to the lockdown and most of them have fallen sick but are not getting any medical attention and food.

In a separate message later, the workers said that they have received a communication from the Shubh Sandesh Foundation that arrangements are being done for their safe return.