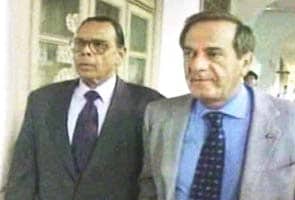 New Delhi: The CBI said in court today that its decision to drop its case against Ottavio Quattrocchi stands. The CBI says it is in no way affected by an income tax tribunal which announced on Tuesday days ago that it had found proof that Quattrocchi and Win Chadha had received kickbacks in the Bofors case.

The judge didn't hold back his criticism of the CBI. "'I am prima facie convinced of malafide and lack of good faith of CBI. On the point of public interest, I have to still satisfy myself. I think this matter will go upto the Supreme Court. The CBI has put the cart before the horse by taking off the red-corner notice against Mr Quattrochi before this court could decide on the withdrawal of prosecution."

The purchase of Bofors guns from the Swedish company and the alleged corruption embedded in the Rs. 1500-crore deal put Rajiv Gandhi in the hot seat and cost him the elections in 1989. Quattrocchi, an Italian businessman once considered a friend of the Gandhi family, and was accused of serving as a conduit between the Swedish company and Indian politicians who received kickbacks for the deal. He left India in 1993 to avoid being arrested. Chadha, the Bofors agent in India, died in 2001.

Quattrocchi was named as an accused by the CBI in 1999 and issued a non-bailable warrant for him. India tried to have the businessman extradited and then in 2009, the CBI dropped him from its wanted list, thereby indicating that the Interpol alerts for him could be withdrawn.

Asking the court for permission to wrap up its case against Quattrocchi, Additional Solicitor General P P Malhotra said, "It is a settled position that criminal liability and the liability under the Income Tax Act are separate and distinct. The assessing officer is not a court...There is difference between criminal proceedings and judicial proceedings."

Advocate Ajay Agarwal, who has challenged the CBI's appeal to close its investigation against Quattrocchi, said the tribunal's findings must motivate the CBI to "file a fresh affidavit detailing its future action to bring back Quattrocchi to face trial."

The case will be heard next on February 10.
Comments
Bofors scamBofors kickbacksOttavio Quattrocchi