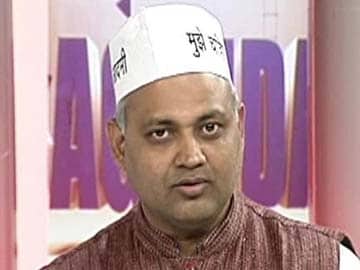 New Delhi: The Aam Aadmi Party, which recently formed the government in Delhi and has won huge public support for its anti-corruption stand, is now tackling allegations that its Law Minister, Somnath Bharti, tried to influence a witness and tamper with evidence in a case he handled last year.

The Congress and the BJP say the lawyer-turned-minister must resign immediately or be removed from office by Chief Minister Arvind Kejriwal, who founded the Aam Aadmi Party or AAP a year ago.

In August last year, Mr Bharti and his client were fighting a corruption case in a CBI court in Delhi when the judge said their conduct is "not only highly objectionable, unethical, but also amounts to tampering with evidence."

Mr Bharti has denied the charges. "We made an audio CD to expose those making false claims in the Rs 116 cr case but the court refused to go into the details of the tapes. I don't see this as tampering of evidence. The CBI should catch the real culprits," he told reporters. But he evaded questions on whether, as a defence counsel, it was unethical for him to contact a prosecution witness.

"Mr Kejriwal must deliver on his promise that he made to the people of zero tolerance towards corruption," said Shakeel Ahmad of the Congress ,which props up the minority AAP government.

"This is a very serious allegation against Somnath Bharti. He misbehaved with his law secretary once. Now there is fresh evidence that he tried to tamper with evidence in an important case," said BJP leader Harsh Vardhan, who was chief ministerial candidate in the December Delhi election.