This Rule stated that temple premises shall not be used for programmes not connected with temple rituals. 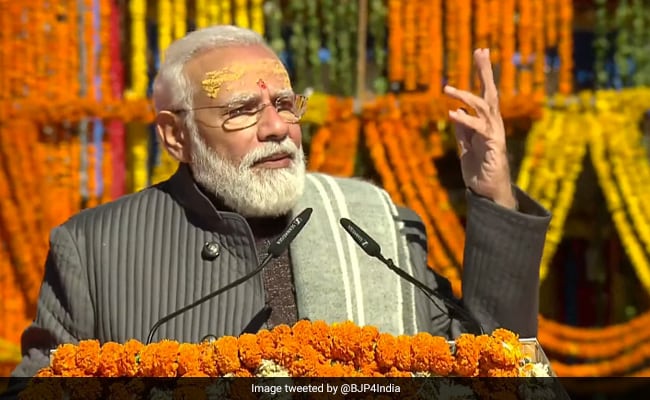 The bench said there was nothing political in the PM's speech. (FILE)

Holding that there was nothing political in the speech delivered by Prime Minister Narendra Modi at a function at the 'samadhi' of Adi Shankaracharya in Uttarakhand last year, the Madras High Court on Thursday rejected a plea alleging violation of 'Temple Entry Rules' in the telecast of his address.

In his petition, Rangarajan Narasimhan of Srirangam in Tiruchirappalli district, among other things, alleged that the performance of Pooja by the Prime Minister at the Samadhi at Kedarnath on November 5, 2021 and his speech were directly telecast in more than 16 temples in Tamil Nadu. It violated Rule 8 of the Temple Entry Rules.

This Rule stated that temple premises shall not be used for programmes not connected with temple rituals.

State Advocate-General R Shanmugasundaram submitted that the participation of the Prime Minister at the function was telecast live following an instruction from the Union government. The PM did not talk about politics. It was only a religious programme, he added.

Satisfied with AG's submissions, the bench said there was nothing political in the PM's speech. He talked only about Adi Shankara and the arrangements made to combat Covid-19 and the same cannot be termed as political.

The petitioner has taken one paragraph out of context and without taking note of what the theme of the speech was about. After indicting the petitioner for making the allegation without understanding the speech, the bench rejected his plea.

Petitioner alleged that the PM had utilised the occasion to tell the citizens about the government's achievements. The programme was telecast live inside the temples in the State with big screens and loud speakers.

Several politicians belonging to the party (BJP) attended the programme. It was in total violation of Rule 8 of the Temple Entry Rules. It also directly infringed upon the fundamental rights guaranteed under Article 26 of the Constitution, petitioner contended.