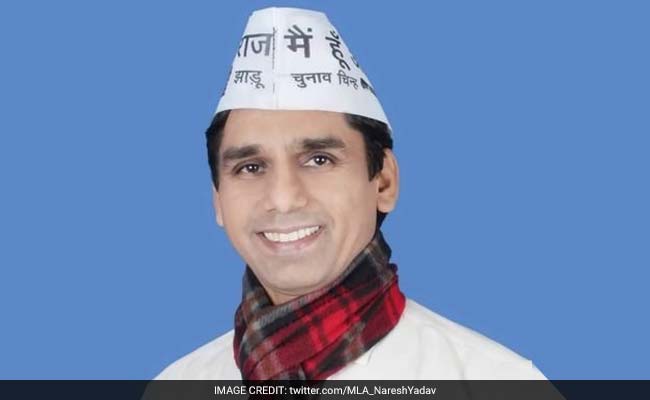 Naresh Yadav said he was framed and falsely prosecuted

A court in Punjab's Sangrur acquitted AAP MLA from Delhi Naresh Yadav on Tuesday in a case of desecration of the Quran in Punjab's Malerkotla town in June 2016.

However, Sangrur Additional Chief Judicial Magistrate Prashant Verma convicted former RSS "pracharak" Vijay Kumar and another accused, Gaurav Kumar, in the case and sentenced them to two years in jail.

Besides Naresh Yadav, another accused, Nand Kishore, was also acquitted in the case, Narpal Singh Dhaliwal, the counsel for the AAP MLA, said.

Vijay Kumar and Gaurav Kumar were convicted under relevant sections of the Indian Penal Code for "deliberate and malicious acts, intended to outrage religious feelings of any class by insulting its religion or religious beliefs", "promoting enmity between different groups on grounds of religion, race etc." and "conspiracy", Mr Dhaliwal said.

They were sentenced two years of imprisonment and a fine of Rs 11,000 each.

The sentence was suspended for a month so that the convicts could approach the higher court. All the accused in the case were on bail.

Naresh Yadav, on his acquittal, said he was framed under a conspiracy and was falsely prosecuted.

"Vijay Kumar, whom I did not even know, was asked to name me to implicate me under the conspiracy, but they could not present any evidence against me in the court. I thank the court for declaring me innocent and acquitting me. We had full faith in the court," he added.

He said the party does not hurt anyone's religious feelings and does politics of development.

On June 24, 2016, torn pages of the Quran were found scattered on a road in Malerkotla. This led to violence and burning of vehicles by an angry mob. Four persons, including the AAP MLA, were arrested in the case.