Coronavirus Lockdown: The kids have enthusiastically joined the celebrities and business tycoons in donating in the PM-CARES Fund and also aid in direct relief measures for the poor. 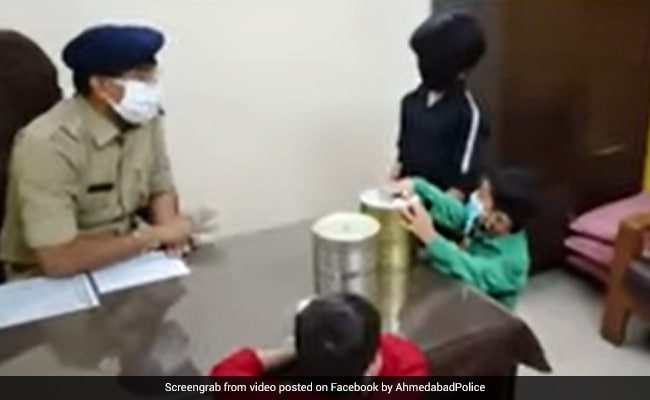 Children have joined celebrities and business tycoons in donating in COVID-19 fund.

In a heart-warming gesture, children in Gujarat are emptying their humble piggy banks and donating their little savings to help fight the coronavirus crisis and provide relief to poor people affected by the ongoing lockdown.

They have enthusiastically joined the celebrities and business tycoons in donating in the PM-CARES Fund and also aid in direct relief measures for the poor.

The Prime Minister's Citizen Assistance and Relief in Emergency Situations Fund (PM-CARES Fund) was set up last month to raise money to deal with any emergency situation, like COVID-19 now, and provide relief to the affected people.

While a four-year-old girl from Ankleshwar town in Bharuch district has donated Rs 11,200 in the PM-CARES Fund, three boys from Ahmedabad walked into a police station to give away their combined savings of Rs 5,500 to feed the poor and migrant workers, whose life has been upended by the lockdown.

Four-year-old Paris Vyas won the hearts of millions when she told the media she is donating whatever she had saved in her piggy bank to fight the crisis and provide succour to the poor.

It turned out that her fancy piggy bank had coins and currency notes worth Rs 11,200.

"I am donating whatever I have saved in my piggy bank. I saw on TV that many famous people are giving money to fight coronavirus."

"If they can do it, I can also give my money. I am giving away all my savings. Everyone should donate money to help the government in fighting coronavirus," she said.

Inspired by her gesture, a family in Gandhinagar has decided to donate Rs 1 lakh in the fund after being prompted by their 13-year-old son Rudra Patel to do so.

"I have decided not to celebrate my birthday this time. Upon my request, my parents have decided to donate Rs 1 lakh into the PM-CARES Fund," Rudra told a news channel, proudly holding a cheque of the same amount.

Three boys, brothers aged between four and 10 years, walked into a police station in Ahmedabad with their piggy banks as they wanted to contribute in city police's efforts to feed the poor, homeless and migrant workers hit by the lockdown imposed to stem the spread of COVID-19.

In a video shared by the Ahmedabad police on its Twitter handle, the three brothers are seen walking into the premises accompanied by their mother.

"Heartfelt thank you to Zaid, Moin and Amen, who donated Rs 5,500 from their piggy banks after their mother showed them the relief work being done by us.

"We are extremely pleased by the kind gesture of these kids," said the police in a tweet on Wednesday. In the video, one of the boys can be heard asking a sub-inspector to give his money to the poor.

"What you (police) are doing for the poor people is commendable. Though they have nothing to eat, they feel shy in asking for help directly.

"We are living in difficult times. Thus, my kids told me to donate their savings to help the poor," the woman can be heard saying in the video shot inside the police station.