Madhya Pradesh hospitals and Covid treatment facilities face an acute oxygen supply crisis amid a surge in new cases - the state reported 8,998 this morning and over 12,000 in the 48 hours prior.

The Shivraj Singh Chouhan government claims it has doubled supply over the weekend - from 130 metric tonnes on Thursday to 267 on Sunday - but that increase has been dwarfed by rising demand, leading to panic - from patients and families, and doctors - in hospitals across the state.

In Bhopal a hospital refused to admit seriously ill people without a signed acknowledgment from family members - that they had been informed about the crisis in advance.

Another went a step further on Tuesday and turned away critically ill people like Ashok Rai, who was literally gasping for a breath. The authorities said they'd received only 30 per cent of the required oxygen supply the state government said had been more than doubled.

"We need 90 cylinders but are getting 30... six people have died because of a lack of oxygen. The dealer has not turned up for the past week," Ashish Goswami, the Citi Hospital's press officer, said.

Mr Goswami was sacked after his statement but highly-placed sources have confirmed what he said - that the hospital did run out of oxygen and was unable to arrange for more cylinders.

Similar crises affect other hospitals in the city.

The Neuron Hospital had started demanding signed notes from would-be patients and family members that say they are aware of the crisis, and will not hold the facility liable.

Now they too have stopped admitting critically ill patients. 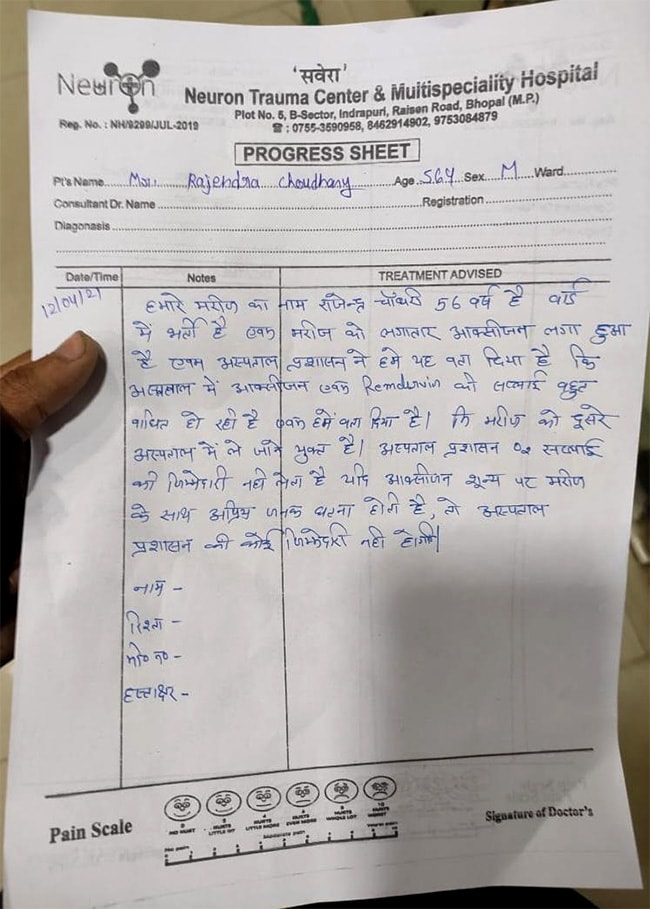 "We are facing an acute shortage of oxygen and Remdesivir (an anti-viral drug used in some Covid cases)... so we have stopped admitting critical patients," Dr Dhanjay Mishra explained.

In Ujjain the RD Gardi Medical College has also sounded the alarm; in fact, they sounded multiple alarms, including the skyrocketing costs of oxygen cylinders and medical equipment.

"... if the state government won't compensate us it will be difficult to run the hospital," he added.

Apart from dwindling oxygen supplies and rising costs, hospitals are also battling a lack of beds. People at a COVID-19 facility in Ujjain are forced to lie on the floor for their treatment.

The state, which lacks an oxygen plant of its own, has said it is in touch with the centre. Chief Minister Chouhan said: "Beds can be made available but beds with oxygen are required..."

Experts say the state needs around 400 metric tonnes of oxygen at this time.

In September last year four people died in Dewas district after a "miscommunication" over cylinders from Maharashtra. The state insisted the deaths had nothing to do with that issue.