The Shiv Sena leader performed the ceremony, which is customary for the state's chief minister, with all safety measures in place at the Pandharpur Temple, some 360 km from Mumbai 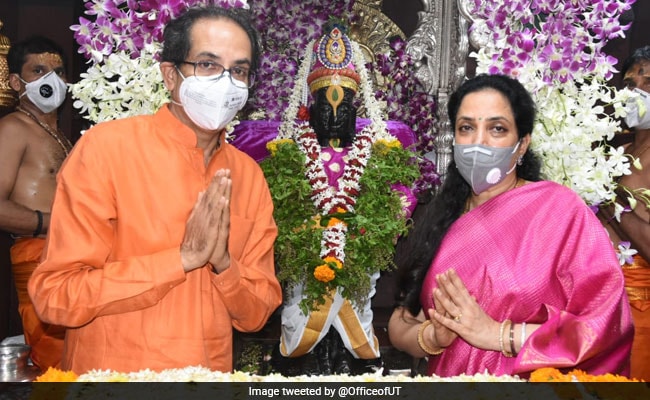 Chief Minister Uddhav Thackeray and his wife performed the puja with all Covid safety measures in place.

On Ashadhi Ekadashi, Maharashtra Chief Minister Uddhav Thackeray prayed to Lord Vitthal and Rukmini for the country to be able to overcome the coronavirus crisis

"I prayed...to see a miracle. Show us a miracle, human beings have given up. We don't have medicine. How do we carry on with life with a cloth strip covering our faces," Mr Thackeray said after the "mahapooja" with wife Rashmi at the Pandharpur temple, some 360 km away from the state capital.

This year, the pilgrimage, which is characterized by lakhs of devotees thronging the temple town, was only attended by about 200 people. A curfew was also imposed since Tuesday.

In a video shared by son Aaditya Thackeray, who is also a minister in the state cabinet, the Thackerays can be seen worshiping the deity with all Covid safety measures in place. They were joined by priests and a "warkari" couple from Ahmednagar.

Warkaris are devotees of Lord Vitthal and Rukmini.

The images were tweeted by the Office of Uddhav Thackeray

Mr Thackeray also handed over a cheque of Rs 5 crore to the Pandharpur Municipal Council and thanked the warkaris for cooperating with the government.

Every year, lakhs of Warkaris converge at Pandharpur during Ashadhi Ekadashi.

This time, however, in view of the need to avoid crowding because of the pandemic, the police only permitted nine palkhis, or palanquin processions, with 20 Warkaris per procession to go to Pandharpur.

Each palanquin carried the "padukas" or the holy feet of various saints, most notably of Saint Dnyaneshwar and Saint Tukaram from the Warkari sect, from their respective shrines to Pandharpur.

All devotees were taken in state transport buses instead of being allowed to walk the distance from their villages to the temple - as has been the tradition for more than 700 years.