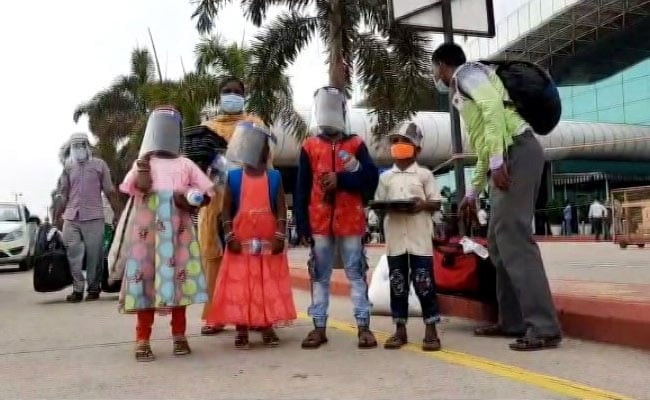 The NLS alumni first chartered a flight to facilitate the return of distressed people home on May 28.

Efforts of the alumni network of a Bengaluru-based law school have helped hundreds of migrant workers, stranded in various parts of the country due to the COVID-19 lockdown, return home safely.

This morning, 180 migrant workers were flown from Bengaluru to Chhattisgarh's capital Raipur in a chartered flight hired by the alumni of the National Law School of India (NLS) University using generous donations.

"The chartered flight left Kempegowda International Airport in Bengaluru for Raipur on Thursday morning. The check-in process was carried out around midnight," Vijay Grover, a journalist who has been working for the cause of migrant workers stranded in Karnataka, told PTI.

"This is the first flight out of Bengaluru under Mission Aahan Vahaan and the initiative has been managed primarily by some NLS Alumni members who are based in Bengaluru," he said.

The flight was sponsored by Ajay Bahl, the managing partner of a leading law firm, whereas the NLS Alumni team liaised with the Chhattisgarh government to ensure that the workers could reach their homes from Raipur, Grover added.

Since May 28, according to Mr Grover, when the alumni team flew over 160 migrant workers to Jharkhand from Mumbai - the first instance of a charity flight being used to facilitate the return of distressed people during the lockdown - over 500 stranded workers have been flown home to Jharkhand and Odisha from Mumbai.

In the week since, several organisations and influential individuals, including actor Sonu Sood and AAP MP Sanjay Singh, have also come forward to help migrant workers fly back home.

The initiatives come in the backdrop of reports of deaths of migrant workers because of heat, shortage of food and water on board Shramik Special trains, many of which have been delayed, and states not being able to ply enough buses to repatriate all those wanting to return.

The NLS Alumni Bengaluru coordination team worked with several NGOs and volunteer teams to extend Mission Aahan Vaahan's reach to "those who needed it most". They were supported by a team of volunteers from the NLS Alumni network spread across the country and world.