3,060 Special Trains Ferried Around 40 Lakh Migrants Since May 1: Railways

Of the total trains, 2,608 trains have terminated, while 453 are on run, the railways said, adding that on Sunday, 237 special trains moved 3.1 lakh passengers. 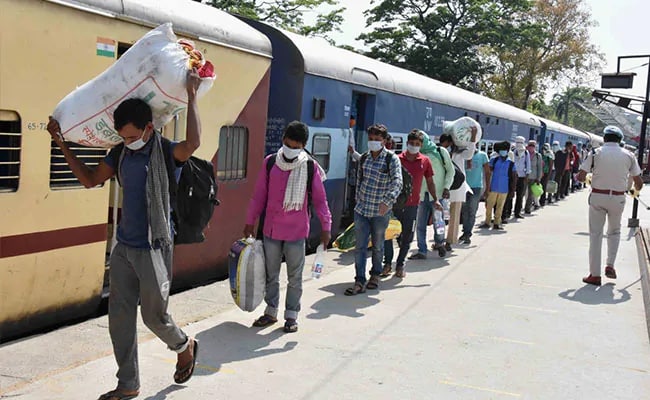 The Railways is bearing 85 per cent of the total cost of running each train. (File)

The Railways has ferried around 40 lakh migrant workers on board 3,060 ''Shramik Special'' trains since May 1, according to official data.

Of the total trains, 2,608 trains have terminated, while 453 are on run, the railways said, adding that on Sunday, 237 special trains moved 3.1 lakh passengers.

The Shramik Special trains are being operated primarily on the requests of the states, which want to send migrant workers to their native places.

The Railways is bearing 85 per cent of the total cost of running each train while the rest is being borne by the states in the form of fares.

The coronavirus-triggered lockdown has had a devastating impact on the economy as well as on the livelihoods of lakhs of migrant workers.

It shone the spotlight on the miseries of migrant workers whose journeys on foot from several urban centres to their villages hundreds of kilometres away had grabbed headlines for almost two months.

There were incidents of many of them being killed in road accidents. A number of migrant labourers were even killed by a speeding train after they fell asleep on the tracks.

The Railways also said that the rail route congestion which was witnessed on May 23 and 24 is now over.

"The congestion had occurred due to convergence of more than two third rail traffic on routes to Bihar and Uttar Pradesh and late clearance of the terminals due to health protocols etc. that needed to be completed by state authorities," it said.

"The matter has been resolved through active consultation with state governments and also finding other feasible routes for the journey," it added.

On May 1, the Railways started the migrant special trains to facilitate the movement of such workers back to their home states.

While on the first day, four such trains were operated, the number was increased to 279 on May 20.

In the last four days, the railways has operated 260 trains on an average daily carrying about three lakh passengers.