Coronavirus News LIVE Updates: According to the Union Health Ministry, the active COVID-19 cases in country stand at 5,61,908. 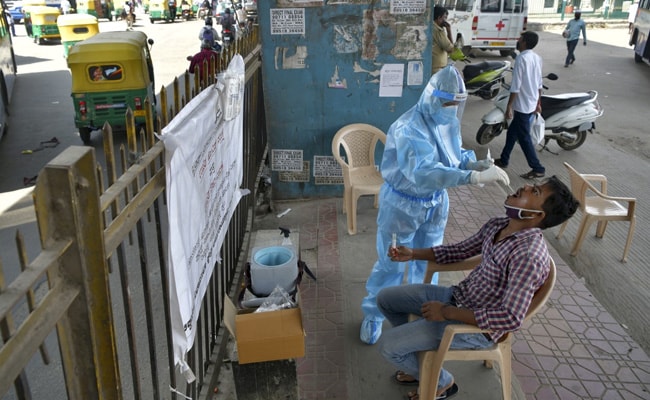 India recorded 45,231 new cases of COVID-19 in the last 24 hours, government data shows. The daily case count was 3.6 per cent lower than yesterday's 46,963. With this, the country's overall coronavirus cases since January surged past 82.29 lakh.

In this period, 496 people lost their life to COVID-19, which has claimed more than 1.2 lakh lives till now. The country's Covid fatality rate has remained steady at 1.5 per cent.

India is the world's second-worst affected country after the United States, which has nearly 92 lakh infections and logged record 1 lakh-plus cases in a day yesterday.

Active cases dropped to 5.61 lakh as 53,285 people fought off COVID-19 over a one-day period. More than 75.4 lakh people have recovered from the coronavirus disease till now, pushing the recovery rate to 91.7 per cent.

Maharashtra - the worst affected state in the country with total 16.8 lakh cases with 44,024 deaths - logged the third highest daily Covid numbers at 5,369.

Here are the Updates on Coronavirus (COVID-19) Cases:

Nov 03, 2020 05:17 (IST)
Festive Season, Laxity Caused Spike In Covid Cases In Delhi: Officials
Delhi has been reporting over 5,000 coronavirus cases everyday for the last seven days. This has prompted the Home Ministry to review the situation in the national capital. In a meeting chaired by Home Secretary Ajay Kumar Bhalla, they discussed strategy for the city that is likely seeing a third surge in COVID-19 cases.

Officials who participated in the meeting attributed the surge in COVID-19 cases in Delhi to festivals, more movement of people and laxity in adhering to safe behaviour. They said the Home Ministry is putting efforts for more testing, contact-tracing and treatment, especially in critical zones.

Nov 03, 2020 04:13 (IST)
Family of Critically-Ill Bengaluru Covid Warrior Seeks Help For Treatment
A doctor in Bengaluru, among the hundreds of healthcare professionals at the forefront of the city's war against COVID-19, is fighting for his life in a city hospital after contracting the viral disease in the line of duty.

Dr Balaji Prasad's lungs suffered severe damage after he tested positive for coronavirus in mid-September. The 54-year-old nephrologist may now need a lung transplant, something his family can ill afford.

"My husband is a very kind man who never charged fee from Covid patients with limited resources; I have discovered this only now," Dr Parad's wife Himali told NDTV. As a Covid warrior, he never hesitated in helping patients after the coronavirus outbreak, she added.


Nov 03, 2020 03:59 (IST)
Rajasthan Makes Masks Mandatory In Public, First State To Do So
The Rajasthan assembly on Monday passed a bill making it mandatory for people to wear face masks in both private or public means of transport and while attending any social or political events.
The assembly provided for the new anti-COVID measure by amending the Rajasthan Epidemic Act, with Rajasthan Chief Minister Ashok Gehlot asserting that face masks are the sole anti-COVID vaccine as of now.
The House passed the Rajasthan Epidemic (Amendment) Bill, 2020 by voice vote. The Bill also made the new provision by seeking to add a new clause in section 4 of the Act.
Nov 03, 2020 02:35 (IST)
"Lab Reports Say Negative": Air India As 19 Test Positive On China Flight
Air India has reacted to reports that 19 Indians who flew to China's Wuhan - where the Covid pandemic originated in December last year - on a "Vande Bharat" flight on Friday tested positive for the virus on arrival. In a statement to NDTV Air India said it "strictly adheres to all safety protocols" and that all passengers on its Wuhan flight held negative Covid test reports from certified labs.

The tallies, using data collected by AFP from national authorities and information from the World Health Organization (WHO), probably reflect only a fraction of the actual number of infections.

Many countries are testing only symptomatic or the most serious cases.

On Sunday, 5,189 new deaths and 457,794 new cases were recorded worldwide. The countries with the most new deaths were United States with 614, followed by India with 496 and Iran with 440.
Nov 02, 2020 16:39 (IST)
India in pole position globally in COVID-19 recoveries, active cases witness steady downward trend
India continues to occupy the top position globally in terms of COVID-19 recoveries, while the total number of active cases have witnessed a sustained downward trend with its percentage having reduced more than three times in just two months, the Union Health Ministry said on Monday.
With 53,285 people recuperating from the infection in a day, the total number of recoveries have surged to 75,44,798 on Monday, while at the same time the country recorded 45,231 new cases.
There are 5,61,908 active cases of coronavirus infection which comprises only 6.83 per cent of the total caseload in the country, the ministry said. The number of active cases remained below six lakh for four days in a row.
"In a span of just two months, the percentage of active cases have reduced more than three times. On September 3, the percentage of active cases was 21.16 per cent," it highlighted.
India has demonstrated an exponential increase in the number of COVID-19 cumulative tests since January 2020. Expanded testing has led to early identification and appropriate treatment of COVID-19. It has crossed the landmark of 11 crore total tests so far, the ministry said.
Nov 02, 2020 16:26 (IST)
Uttar Pradesh reports 25 more COVID-19 deaths, 1,788 new cases
The COVID-19 death count in Uttar Pradesh rose to 7,076 on Monday after 25 more people died due to the disease, while 1,788 fresh cases pushed the infection tally to 4,85,609, according to a statement.
Three deaths each were reported from Lucknow and Meerut, and two each from Allahabad and Varanasi, among others, the UP government said in the statement issued.
Of the 1,788 new infections, Lucknow reported 220 fresh cases followed by 158 in Gautam Buddh Nagar, 146 in Meerut and 142 in Ghaziabad, among others.
According to the statement, 2,040 COVID patients have recovered from the disease and have been discharged.
There are 23,035 active cases in the state, while a total of 4,55,498 people have recuperated from the infection, it added.
Nov 02, 2020 15:39 (IST)
COVID-19: Maharashtra Deputy Chief Minister Ajit Pawar discharged from hospital
Maharashtra Deputy Chief Minister Ajit Pawar, who was admitted to a city-based hospital after
testing positive for COVID-19 last month, was discharged from the medical facility on Monday.
Disclosing this, Mr Pawar, who was admitted to the Breach Candy Hospital on October 26, said he will be in home quarantine for next some days and thanked those who had wished
him a speedy recovery.
Nov 02, 2020 15:13 (IST)

"I have been identified as a contact of someone who has tested positive for #COVID19. I am well and without symptoms but will self-quarantine over the coming days, in line with @WHO protocols, and work from home," Tedros said in a tweet.