Read inOther Languages
This Article is From Apr 15, 2020

Desperate to resume operations, all Indian carriers are ill-equipped to deal with the extension of the lockdown till May 3.

With no signs of a government financial assistance plan, India's now-grounded aviation sector lies perilously close to bankruptcy as a result of the COVID-19 pandemic.

Desperate to resume operations, all Indian carriers are ill-equipped to deal with the extension of the lockdown till May 3, which was announced on Tuesday. No Indian carrier is even in a position to refund passengers who had booked flights scheduled to operate had the lockdown ended, as originally planned, on Tuesday, April 14.

Instead, SpiceJet, Vistara, IndiGo and GoAir have told passengers that their bookings for travel upto May 3 were cancelled and that their entire amount will be secure in a "credit-shell" which can be used to re-book travel later in the year or early next year.

There is still no clarity, however, if a few of these airlines will survive the next few months without a massive government bailout of the sector, details of which have not been announced.

According to the Centre for Asia Pacific Aviation (CAPA) which closely monitors civil aviation in the country, ''Most Indian airlines have not structured their business models to be able to withstand even regular shocks, such as elevated fuel prices or economic downturns, let alone once-in-a-century events.''

The writing appears to be on the wall. ''In the event of a 3-month shutdown, the two listed carriers alone - IndiGo and SpiceJet - could report combined losses of USD1.25-1.50 billion across 4QFY2020 and 1QFY2021. IndiGo's hitherto enviable free cash reserves may almost be wiped out by the end of 2QFY2021. Smaller carriers may exit,'' says CAPA in its report titled "Projecting the potential financial impact of COVID 19 on Indian Aviation".

Worried about the meltdown of the aviation sector, several countries have already moved to prevent millions of job losses in the industry. There has been no similar announcements in India.

Distressed airlines in the United States can rely on a $71 billion support package. Under job protection measures, airlines in the UK can request the government to subsidise 80 per cent of salaries up to a certain limit for upto three months. Various airlines in the European Union have already negotiated with their governments for packages - Finnair has secured a $650 million loan guarantee, airlines in Norway have been promised $540 million while Swedish carriers can avail of $500 million.

Countries whose economies depend greatly on civil aviation, such as Singapore and the United Arab Emirates, have provided direct cash infusion to save key airlines. The UAE government is fully supporting Emirates through equity infusion while Singapore has announced a $500 million package for the aviation sector, a $2.8 billion bridging loan and a $10 billion rights in equity and convertible bonds which will allow Singapore Airlines to survive the COVID-19 storm relatively unscathed.

The United Arab Emirates and Singapore, whose economies depend greatly on civil aviation, have provided direct cash infusion to save key airlines.

Airlines in India have, in the best of times, suffered the ''double-whammy of steeply rising fuel costs and the decline in the value of the Indian Rupee'', says the International Air Transport Association (IATA). Fuel costs in India, which account for 40 per cent of the overall costs of low-cost carriers, are ''well above the global average of 24 per cent". Fluctuating fuel prices and price-wars within the sector have been part of the reason why once-leading airlines such as Jet Aiways and Kingfisher Airlines collapsed. ''While it is easy to find Indian passengers who want to fly, it's very difficult for airlines to make money in this market,'' says Alexandre de Juniac, IATA's Director General.

India's airlines are heavily dependent on low fuel costs to balance their fixed costs which come from the lease rental of aircraft, labour expenses, sales and marketing, airport charges and other operating expenses. At 9 to 10 per cent of their overall expenses, steep airport charges alone are a serious financial drain. These charges include fees for landing, parking and navigating while over Indian airspace. Airlines are also charged for the use of aero-bridges on a per landing and take-off basis and on the common use of terminals on a per departing flight basis. 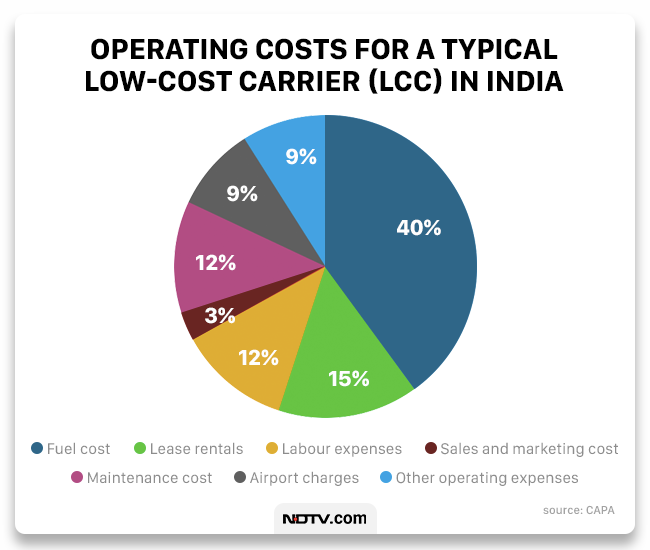 A wish-list for Indian airlines looking to survive the coronavirus storm could include support for salaries, an exemption of airport charges, a reduction on the excise duty on Aviation Turbine Fuel (ATF), bringing ATF under the Goods and Services Tax (GST) regime and suspending infrastructure charges at Indian airports.

With revenues disappearing, IndiGo, GoAir and SpiceJet have already announced steep across-the-board salary cuts. GoAir, which has begun terminating the contracts of its expat pilots, has also asked its staff to go on temporary leave without pay on a rotational basis.

Given the massive slowdown across the economy and plummeting growth rates, the government may, however, only be in a position to offer functional relief which could include ''waivers and moratoriums on liabilities,'' says CAPA. "Given the massive structural dislocation faced by the aviation sector, this may not be sufficient to rescue operators, particularly weaker companies.''

India's national investment promotion and facilitation agency, Invest India, proudly says, ''India is now the third largest and fastest growing aviation market in terms of domestic tickets sold". That may have been true before COVID-19 struck.