Special Trains To Run As Per Schedule From Today: Railways

An official however said the changes requested by the states in regard to stoppages will be allowed. 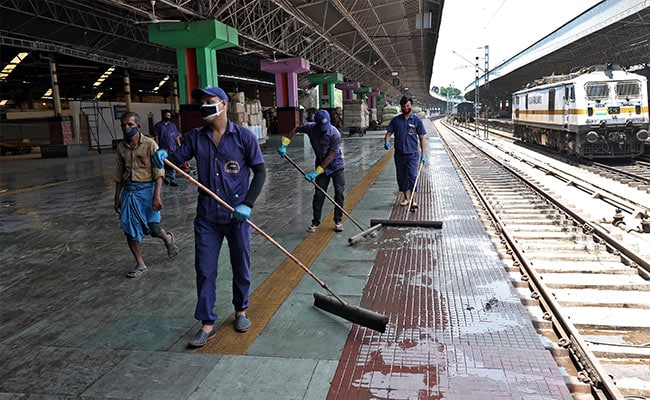 The Railways has decided to run 200 special passenger trains from June 1. (File)

In a marathon meeting which ended hours before the Railways began operating 200 special passenger trains, the national transporter said its trains will run as per schedule with minor changes in stoppages to address the concerns expressed by Jharkhand, Andhra Pradesh and Maharashtra about the planned services from June 1.

Sources said a high-level meeting was convened at the railway headquarters to resolve the matter. They indicated that the three states have raised concerns over the rising cases of the coronavirus as the reason behind their opposition to movement of trains.

"Jharkhand, Andhra Pradesh and Maharashtra have expressed reservations about running of trains or number of stoppages as planned. The matter is being discussed with the states. Any further development in this regard will be intimated," a railway spokesperson said.

The spokesperson, at 11 pm, minutes after the meeting ended said that "all trains are running as planned".

An official however said the changes requested by the states in regard to stoppages will be allowed.

Andhra Pradesh requested that only 22 trains should come to the state, and instead of the planned 71 stoppages it asked for one halt at an intermediary station along with the terminating station.

Sources said Jharkhand requested that four trains to the state be dropped, while 20 others have fewer stoppages.

The South Central railway, under which Andhra Pradesh falls, said in a statement late Sunday night that all intra-state movement of passengers within the state of Andhra Pradesh by railways stands restricted.

"All passenger movements where both the boarding and deboarding station for a passenger falls within the state of Andhra Pradesh stands restricted under further advice," it said.

The statement said full fare refunds will be given to passengers who have booked their train journey with an intention to travel within the state.

Earlier on May 21, the railways had cancelled tickets of all passengers of these special trains whose originating and terminating stations fell within Maharashtra after the state government prohibited inter-district travel.

In an order, the railways said all the tickets of the special trains scheduled to run from June 1 in Maharashtra will be automatically cancelled and full refund will be provided to passengers.

It also said that till further notice, intra-state bookings within Maharashtra should not be permitted. This, however, does not mean that trains cannot originate from stations in Maharashtra, a railway spokesperson said. This meant that if a passenger boards a train from Maharashtra, s/he cannot deboard within the state borders.

The Western Railway in a press release said that Chairman Railway Board, VK Yadav has written to Ajoy Mehta - Chief Secretary of Government of Maharashtra, requesting him to issue necessary instructions to the district administrations to organise the compliance to the guidelines of MHA and MOHF for running of special trains from June 1.

"He has mentioned in the letter that as large number of passengers have already booked to travel by these services, it would cause severe inconvenience to the passengers and may also lead to law and order issues at various stations if these trains are cancelled and therefore, it would be desirable to continue the train operations, which have already been announced on May 20 and booking has started on May 21," the release stated.

The Railways has decided to run 200 special passenger trains from June 1 and the first train was scheduled to depart from the Chhatrapati Shivaji Maharaj Terminus in Mumbai for Varanasi at 00:10 am.