The Lok Sabha Speaker has urged state assemblies to explore the feasibility of extensive use of digital technology in legislative and financial work. 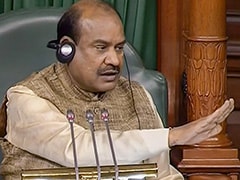 Lok Sabha Speaker Om Birla said on Tuesday that control rooms should be set up in assemblies for better coordination between states in helping migrant labourers and students stranded due to the ongoing lockdown to combat the novel coronavirus.

After an online interaction with assembly speakers on the prevailing situation, Mr Birla said a control room would also be set up in Parliament for exchange of real-time information between MPs and MLAs, and for better coordination in the fight against the deadly virus.

"I interacted with speakers of 27 state assemblies and one chairman of state legislative council. All...in once voice said they are with the respective executives in this time of crisis," Mr Birla told reporters in Parliament House.

He suggested that control rooms should be set up in assemblies for better coordination between states in helping migrant labourers and students stranded due to the ongoing lockdown.

The country has been under a lockdown since March 25 to check the spread of the deadly virus. The shutdown will continue till May 3.

The Lok Sabha Speaker also urged state assemblies to explore the feasibility of extensive use of digital technology in legislative and financial work and for other routine tasks such as meetings and file movements so as to make sure that stringent social distancing norms are followed in their respective states.

"Assemblies and Parliament must adopt technology for functioning more effectively," he said.

The speaker said the central and state governments have been vigilant and have taken necessary steps to contain the spread of the novel coronavirus.

"Efforts of the government have been complemented by the strength of the people, which has helped mitigate the situation," Birla said while thanking the people for their cooperation and spirited resistance to the disease outbreak.

"The situation is largely under control and the government is fully prepared to meet any challenges," he said.

The death toll due to COVID-19 rose to 590 and the number of cases climbed to 18,601 on Tuesday, according to the Union health ministry.

Talking about India's efforts to reduce the effect of the pandemic outside the country, Mr Birla said that wherever possible India has tried to help other countries by supplying medicines and other essential equipment, thereby living up to the ancient Indian philosophy of "Vasudhaiva Kutumbakam" (the world in one family).