Read inOther Languages
This Article is From Aug 08, 2020

A social worker and one of the largest youth volunteer organisations in the country organised the 450-km relay from Guwahati to Dibrugarh in less than 8 hours. 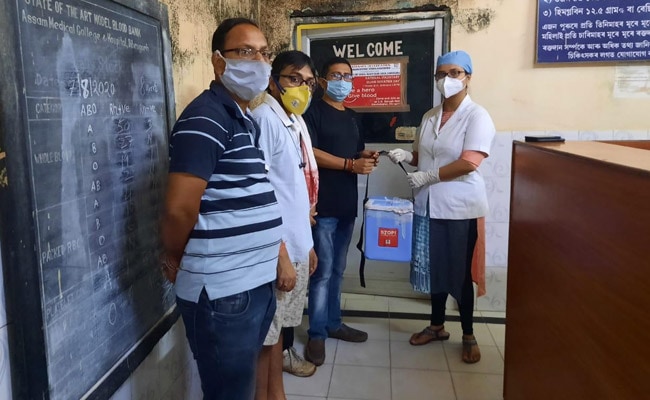 This plasma was handed over at 6:15 am on Saturday to the Dibrugarh medical college.

When they say not all heroes wear capes, this is what they mean. A dozen young men from Assam drove their car at breakneck speed on Saturday - almost like a relay race - handing over an ice box with blood plasma from one group to another, covering a distance of 450 km from Guwahati to Dibrugarh in less than 8 hours to save the life of a COVID-19 warrior battling the deadly infection in the ICU of the Assam Medical College Hospital (AMCH) at Dibrugarh.

It all started late evening on Friday when Dibrugarh-based doctor and social worker Bhaskar Papukon Gogoi got a call about an urgent requirement of blood plasma for Bijurani Gogoi, a staff nurse at the AMCH, who was infected with the coronavirus in the line of duty and is battling for life. The plasma bank at AMCH had run empty, the nearest option was Jorhat Medical College Hospital (JMCH), but it also had no stock.

"I was able to get one unit of plasma at Guwahati Medical College but the issue was how it will be brought. The government machinery is already overstretched with the COVID spike in Assam," said Dr Gogoi who runs a plasma donation campaign of his own in Dibrugarh and had helped arrange blood plasma for a few other patients in Dibrugarh in the past.

That is when Dr Gogoi dialled the Dibrugarh unit of the Marwari Yuva Manch (MYM), which is one of the largest youth volunteer organisations in the country with members from the Marwari community living across the country.

Earlier this week, Dr Gogoi had organised blood plasma donation at Dibruagrh with the help of MYM.

"At around 9 pm, our Dibruagrh unit informed us. We had in past been actively involved in Assam in helping poor people, flood relief, blood donation but this was a new crisis but we decided to take the responsibility of taking the blood plasma unit from Guwahati to Dibrugarh," Rahul Agarwal, the general secretary of the northeast chapter of MYM told NDTV. MYM has nearly 7,000 active members in northeast India.

There was a huge challenge - inter-district movement in Assam is barred and there is night curfew every day between 6 pm to 6 am and on weekends there is a total lockdown.

This where the President of MYM Northeast Mohit Nahata who lives in Kokrajhar activated all MYM units between Guwahati to Dibrugarh. It was decided that each of the district unit will take the blood plasma to their district border and the next district unit will be waiting at the border to take over. Mr Nahata monitored the entire process over phone.

At 10:35 pm, Rahul Agarwal and Ravi Surekha received the blood plasma unit from Guwahati medical college (GMC) and rushed to Nagaon, where they handed the unit over to their Nagaon team, which handed it over to another team at Bokakhat.

"It was like a relay race, racing against time and opponent, handing over the baton. Bokakhat team gave it to Jorhat, Jorhat team drove to the border of Sivasagar and Sivasagar team drove it to Moran and finally Moran to Dibrugarh," Rahul Agarwal added.

"We had never done anything of this magnitude. We are happy that we pulled it off. Our teams were stopped by police at several places but we showed the letter from GMC and between Jorhat to Joran our teams had to negotiate heavy rain. All of us were awake, tracking the teams on the move through live locations," said Subir Kejriwal who received the blood plasma at Dibrugarh at 6:14 am and handed over to AMCH.

For Dr Gogoi it was a sleepless night but he came with the Dibrugarh team to receive the blood plasma.

"It's a night I will never forget in my life. I also went with the Dibrugarh team to take the ice box carrying blood plasma. It would not have been possible without these youths. They are the shining example on how youths and the civil society can make a difference in this war against COVID," Dr Gogoi added.

The patient was administered plasma on Saturday, AMCH sources added.