66 On Board Cruise Ship Docked In Goa Test Positive, 2,000 Were Tested

Cordelia cruise ship Goa: The cruise ship was carrying a large crowd of passengers who came to celebrate the New Year amid the Omicron threat 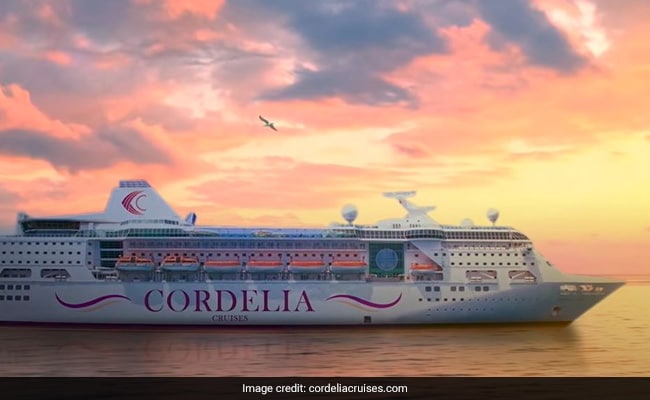 Cordelia cruise ship Goa: A decision on whether to allow passengers to leave would be taken later

Sixty-six passengers in a cruise ship that sailed from Mumbai to Goa have tested positive for COVID-19. In a tweet, Goa Health Minister Vishwajit Rane said some 2,000 samples were tested on board the cruise ship, Cordelia.

The cruise ship was carrying a large crowd of passengers who came to celebrate the New Year amid the Omicron threat.

Passengers have been told to stay put for now. A decision would be taken later whether they would be allowed to leave the ship, the Health Minister said.

"Out of 2,000 samples tested from Cordelia cruise ship, 66 passengers tested positive for COVID-19... The authorities will decide whether to allow disembarking of passengers from the ship," Mr Rane tweeted.

Out of 2000 samples tested from Cordelia crusie ship, 66 passengers tested positive for #COVID19
Respective collectors & MPT staff have been informed of the same.

The authorities will decide whether to allow disembarking of passengers from the ship.

Cordelia is the same cruise ship raided by Narcotics Control Bureau officials last year over an alleged drugs bust in a case in which actor Shah Rukh Khan's son Aryan Khan, among others, were named.

A medical team in personal protection kits had boarded the cruise ship to conduct RT-PCR tests of passengers and crew. It is anchored close to Mormugao port in Goa.

Beaches in the coastal state popular with tourists teemed with a sea of people during the New Year, leading to concerns that it would lead to a massive spike in COVID-19 cases. Already, COVID-19 cases have been rising in neighbouring Maharashtra and other states like Delhi.

The first COVID-19 hotspot in a cruise ship was on board Diamond Princess, which was quarantined by Japan in January 2020 when COVID-19 had started sweeping across nations. Over 700 people on board the cruise ship had tested positive.

Goa recorded a massive jump in COVID-19 infections today with 388 cases and over 10 per cent of COVID-19 tests returning positive. The coastal state now has 1,671 active cases. It has reported five Omicron infections.

The huge spike in COVID-19 cases has prompted the state government to impose curbs, including night curfew, to control the spread of the virus.