The highest single-day production of PPE kits, around 2.06 lakh kits, was recorded on May 2. However, on average, domestic production is about 1.5 lakh per day. 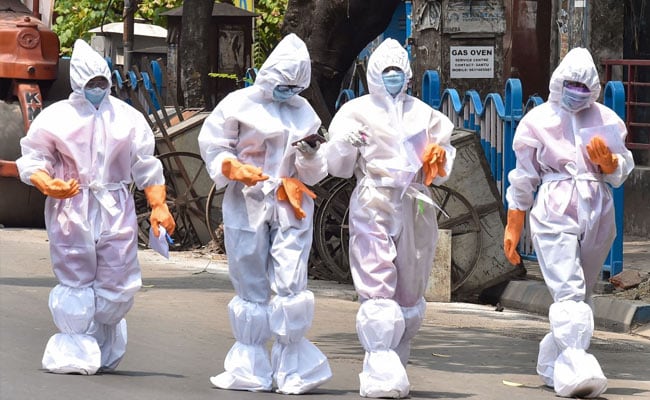 India, which was not manufacturing even a single personal protective equipment (PPE) kit, has now achieved an almost unrealistic goal of producing 2.06 lakh PPE kits daily within two months after the coronavirus outbreak.

The highest single-day production of PPE kits, around 2.06 lakh kits, was recorded on May 2. However, on average, domestic production is about 1.5 lakh per day.

A PPE kit consists of mask, eye shield, shoe cover, gown and gloves, which doctors and healthcare workers wear during the treatment of COVID-19 patients.

"It is very comforting to us that our in-house PPE kit production is increasing fast. On May 2, the country recorded maximum production of protective gears of about 2.06 lakh manufactured in a single day," a senior Health Ministry official told ANI.

"Earlier, there was no domestic manufacturing of PPE kit in the country and almost all of them were imported. Within a short span of time, India has been able to increase the daily production of PPE kits to about 1.5 lakh," he said.

"In January, there were only 2.75 lakh PPE kits (imported ones) available in the country. As of today, we have about 15.96 lakh PPE kits in the centre-state buffer stock," added the official.

The government has identified at least 110 domestic manufacturers of PPE kits in the country. However, only 52 companies are manufacturing PPE kits right now.

The Union Health Ministry official added: "As of now, the Central government has distributed about 21.32 lakh PPE kits to the Centre and state-run hospitals. At least 15.96 lakh PPE kits are in the Centre-State buffer stock."

Recently, the Empowered Group-3 of the Central government had informed that the total projected demand of PPE kits till June 2020 would be 2.01 crore.

Orders for 2.22 crore PPE kits have already been placed, of which orders to the tune of 1.42 crore have been placed with the domestic manufacturers and 80 lakh PPE kits are being imported.

Doctor Dies Of Electrocution While Hoisting Flag In Jammu & Kashmir