Coronavirus Lockdown: The 24-coach train, which usually seats 72 people in a compartment, contained only 54 people in each in accordance with social distancing guidelines

Lockdown: Lakhs of migrant workers were left stranded, without jobs as lockdown started on March 25.

The first "special train" to transport migrants stranded by the nationwide lockdown left Telangana for Jharkhand at around 4.30 am, carrying 1,200 people from Lingampally in the southern state to Jharkhand's Hatia district. The 24-coach train, which usually seats 72 people in a compartment, contained only 54 people in each in accordance with social distancing guidelines. All passengers were also screened for symptoms before being allowed to board.

The train reached its destination on Friday night, from where the state government would take them to their respective districts in sanitised buses, following COVID-19 protocols. The migrants were ecstatic to reach home as they were welcomed with roses by senior officials, news agency PTI reported.

"I am very happy. I don't have words to express my delight.... We were given proper food there and also here," a migrant worker from Ramgarh told PTI.

A second such train is scheduled to depart Kerala's Ernakulam at this evening for Bhubaneshwar in Odisha, according to Kerala minister VS Sunil Kumar. The train, expected to leave at 6 pm and carry over 1,000 people, will be thoroughly disinfected and all passengers, who will be brought to the station by the state, will be required to maintain social distancing.

More special trains to return migrants to their home states will be run over the next few days, after the Home Ministry said: "Movement of migrant workers, pilgrims, tourists, students & other persons, stranded at different places, is also allowed by Special Trains to be operated by Railways Ministry of India".

Movement of migrant workers, pilgrims, tourists, students & other persons, stranded at different places, is also allowed by #SpecialTrains to be operated by @RailMinIndia. MoR to designate nodal officer(s) for coordinating with States/ UTs for their movement#lockdown#Covid_19pic.twitter.com/UvEvDH1Ibj

The train that left Telangana this morning, carrying migrant workers from the IIT Kandi campus in Hyderabad, was kept low-key because the state did not want a repeat of the incident near Mumbai's Bandra station, where thousands of stranded migrant workers defied the lockdown after rumours of a special train to take them home.

"We wanted to avoid what happened in Mumbai a few days ago," a top police officer told NDTV.

"There are around 15 lakh migrants in the state and it is unsafe to send them by buses to towns and villages between 500 and 1,000 kilometres away in such hot weather. Social distancing will be a casualty," Telangana minister Srinivas Yadav said, adding that he had spoken to Minister of State for Home Ministry, G Kishan Redy, about a special train.

Earlier today Jharkhand Chief Minister Hemant Soren tweeted to confirm the centre had accepted his request to run a special train to return people to the state, saying: "The central government accepted our demand to bring back workers. We immediately started work to bring them back safely". 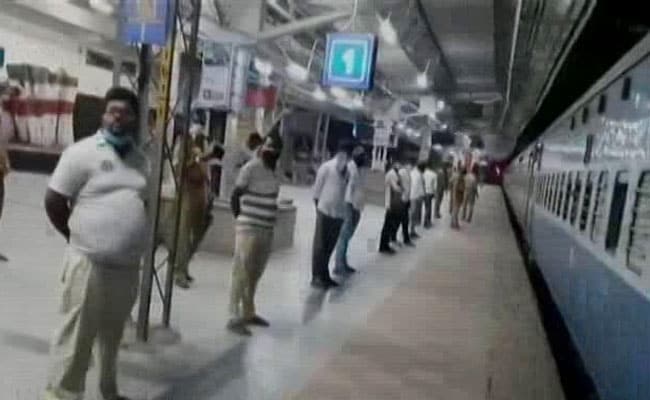 People waiting to board the train in Telangana

Two days ago the centre permitted migrants, students and other people who do not have symptoms of coronavirus infection to return home, nearly five weeks after a nationwide lockdown was imposed to break the chain of transmission of the virus.

However, at that time it said only transport by road would be allowed,

Sources said the decision to allow stranded people to travel came after pressure from within the BJP. There were concerns the migrant crisis could damage the party politically and feedback to this effect was given to party chief JP Nadda during a virtual meeting with MPs and MLAs.

The opposition Congress, which has been critical of the government's handling of the migrant crisis, described the special trains as a "knee-jerk reaction" and said it was too little, too late, according to PTI.

The centre had earlier allowed Uttar Pradesh to send buses to bring back migrants stuck in Haryana, a move that irked Bihar Chief Minister and ruling BJP ally Nitish Kumar, who lashed out at the "injustice" and said interstate movement of people during a lockdown defied its logic.

Jharkhand was also one of the states to question the apparent violation of lockdown rules, under which all rail, road and air traffic had been stopped.

Following the centre's order several states, including Punjab, Bihar, Rajasthan, Maharashtra and some southern states, asked for trains, citing distance and the logistics of bus travel. In its order the centre had said people should go by road and states should make transportation arrangements.

Last week Rajasthan Chief Minister Ashok Gehlot said: "Only meticulously planned strategy with proper mode of commuting such as special trains to be run by the Government of India will solve the problem".

Jharkhand was among those states, with the state's health ministry making the request to the centre. 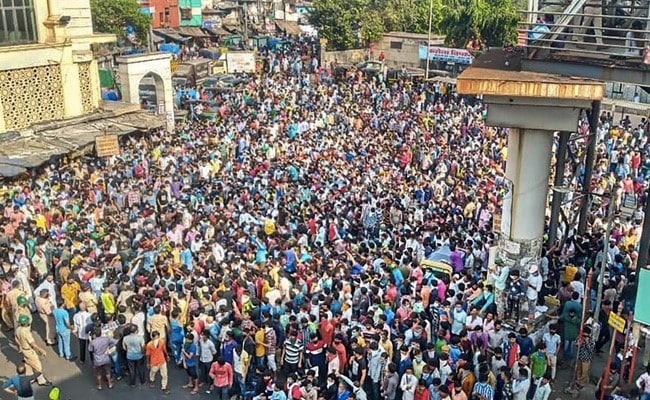 "Jharkhand does not have transport facilities and resources at such a big scale. And arranging resources is not possible. Hence, Prime Minister Narendra Modi should take cognisance and allow people to return home through special trains without charging any fare," Banna Gupta, the Health Minister, was quoted by news agency PTI.

Mr Gupta also said the state health department was ready to conduct tests for the nine lakh people expected to return. "They will be monitored through Arogya Setu application. Screening and testing facilities will be made at every block and division level. However, it will require a huge quantity of medical kits and infrastructure," he said.

Lakhs of migrant workers and others had been left stranded in states far from their own after the nationwide lockdown imposed on March 25. The centre had said migrants would be looked after, but the reality indicated otherwise, with reports of hunger coming in from various corners of the country

And as economic activity came to a sudden stop during the lockdown, thousands were left without jobs, money, food or shelter and, with interstate transport shut, had no choice but to walk hundreds, often thousands, of kilometres home, triggering a humanitarian crisis.

The second phase of the nationwide lockdown is scheduled to end on May 3. It is unclear, as yet, if the government will extend the lockdown a second time, although some states, including Telangana, have already done so.