In Patna Hospital, Body Of COVID-19 Victim Left In Ward For A Day

The body had been left there - with only a brown-and-white checked cloth to cover it - since Sunday, according to the relative of a patient in that room 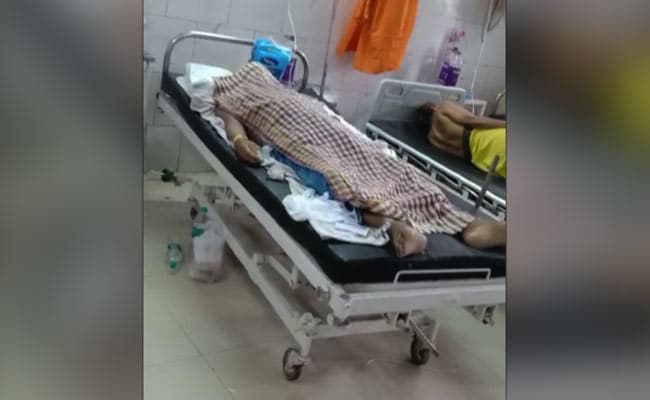 A shocking video has emerged from Patna's Nalanda Medical College and Hospital, the largest government-run facility in Bihar, in which the body of a COVID-19 victim is seen lying on a hospital bed in a room filled with other coronavirus patients and their family members.

The body has been left there - with only a brown-and-white checked cloth to cover it - since Sunday, according to the relative of a patient in that room, who also said several complaints had been lodged with hospital administration but "...still they are not responding and taking it away".

"This body is kept here since yesterday. We have complained but still they are not responding and taking it away," the relative said, adding, "My mother is admitted here. All patients are at risk after this body was left in the ward".

This is not the first time a video like this has emerged from the ICU (intensive care unit) of this hospital. When questioned, the management said the body could not be removed before family members arrived.

The management also said the district administration, which is tasked with collecting the bodies and arranging last rites, would not pick them up before late evening. This was because locals organised protests during the day-time to object to the cremation of COVID-19 victims there.

Bihar is struggling to contain the coronavirus outbreak in the state; over 1,700 fresh cases were reported Saturday, taking the active cases total past 10,000. Over 200 deaths have been linked to the virus.

Worried by the surge in cases, the centre sent a three-member team to assess the state's response and probe allegations that Chief Minister Nitish Kumar had mishandled the crisis.

Several videos have been circulating on social media in which people are complaining about inadequate facilities and negligence at state-run hospitals.

In Katihar, a patient reportedly died after hospital staff failed to provide an oxygen cylinder.

On Friday RJD leader Tejashwi Yadav - who has repeatedly attacked Nitish Kumar over this crisis - shared a video in which patients were complaining about the lack of doctors and nurses at a hospital in Siwan, which is the hometown of state Health Minister Mangal Pandey.

The Bihar government has refuted allegations of mishandling levelled by Tejashwi Yadav.

"Coronavirus is a pandemic and the people of Bihar know it is a difficult situation. The state government is sensitive and is taking all measures to curb the infection. Doctors and health workers are putting their lives at risk to save the people but you (Mr Yadav) can't see it," Neeraj Kumar, a minister and JDU leader, was quoted by news agency ANI.