Coronavirus: Under the first phase of the mass effort announced on Tuesday, two ships were heading towards the Maldives to evacuate some 1,000 Indian citizens while another was headed for the Gulf 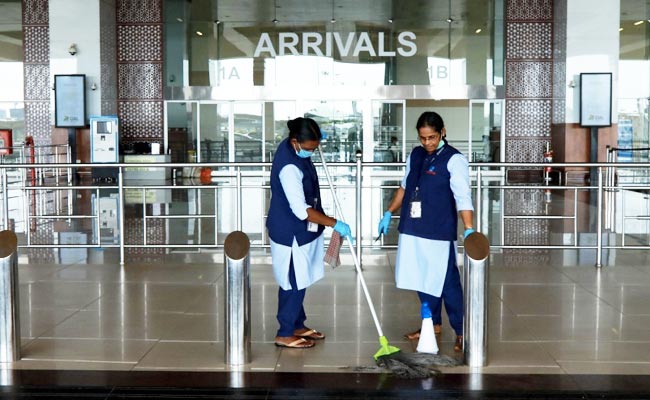 Coronavirus: In total 26 flights will bring Indians home from the Gulf region (AFP)

The Civil Aviation Ministry's website crashed on Wednesday as panicked citizens abroad rushed to register for a repatriation of almost 15,000 Indian nationals from 12 countries on planes and naval ships.

The government banned all incoming international flights in late March as it imposed the coronavirus lockdown, leaving hundreds of thousands of workers and students stranded abroad.

Under the first phase of the mass effort announced on Tuesday, two ships were heading towards the Maldives to evacuate some 1,000 Indian citizens while another was headed for the Gulf.

The first of 64 flights over the first week was due to leave the United Arab Emirates - home to more than three million Indians - on Thursday.

A flight from Qatar for Kerala originally scheduled for Thursday was postponed to Saturday, local media reported.

In total 26 flights will bring Indians home from the Gulf region, while others will operate from Southeast Asia, Britain and the United States.

Media reports quoted Civil Aviation Minister Hardeep Puri as saying that two lakh Indians abroad had registered for repatriation and that the final number could be twice that.

His ministry blamed the crashing of its website on "unprecedented traffic" and urged people to check the website of Air India, which is operating the flights, for details.

Kerala is the biggest source of Indians in the Gulf.

OV Mustafa, the director of Norka Roots, a government welfare body for non-resident Keralites, told AFP that those abroad were "desperate" and in a "panic". The Indian embassy in Abu Dhabi said on Twitter that all passengers would be screened for virus symptoms and given an antibody test at the departure airport.

There were also concerns about social distancing on the flights, with the Times of India quoting Mr Puri as saying that keeping middle seats vacant on the aircraft was not viable.

The Indian embassy statement said that passengers would be given masks, gloves and sanitisers to wear and use on board. Upon arrival, passengers are set to be quarantined for a minimum of 14 days, presenting a large challenge to already stretched authorities.

Kerala Chief Minister Pinarayi Vijayan said the state was "fully prepared" and that "all arrangements are in place for testing and quarantining".

In the first five days, 2,250 people are expected to land at the state's airports in Kochi, Kozhikode and Thiruvananthapuram. Kochi port was also set to receive all three ships. Mr Vijayan said that 442,000 people wanted to come back to Kerala, and that the central government had "only" approved the return of 80,000.

Those being flown back have to pay, with prices reportedly ranging from Rs 12,000 for a ticket from Dubai to Rs 1 lakh to fly back from the United States.

A huge number of Indians who work abroad do menial work and have been left jobless by the pandemic shutdown. The oil-rich Gulf is reliant on the cheap labour of millions of foreigners - mostly from South Asia - many of whom live in squalid camps far from the region's skyscrapers and malls.

Congress MP Shashi Tharoor said in a letter to Prime Minister Narendra Modi that many could "ill afford" to bear the costs.

A Jemford, who works for the non-profit Agaram Foundation in Tamil Nadu, tweeted that the repatriation effort was "only for the rich". One Indian man in Sharjah in the UAE whose wife is six months pregnant told AFP that he registered with the consulate last week but has heard nothing since.

"I don't have medical insurance to cover the delivery costs here so I wanted to get her back home to Kerala to her parents. And she has complications in her pregnancy," said the man, who did not wish to be named. "It's been a week and we haven't heard anything," he said.