All six are either asymptomatic or mildly symptomatic, their samples have been sent for genome sequencing, and contact tracing is underway 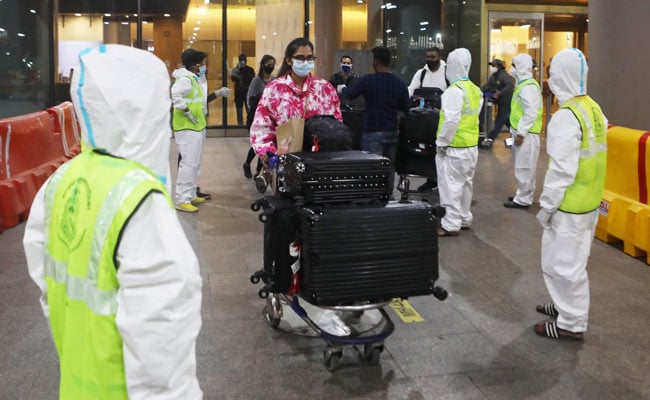 Omicron: Maharashtra has enforced new rules for passengers from 'at risk' countries

Six international passengers arriving from 'at risk' countries - which include those that have confirmed cases of the highly transmissible Omicron strain - have tested Covid positive, the Maharashtra Health Department said Wednesday morning.

All six are either asymptomatic or mildly symptomatic and their samples have been sent for genome sequencing, the Health Department said. Contact tracing for all six passengers is underway.

Starting today, airports in India have enforced strict quarantine and testing rules for passengers from 'at risk' countries, amid growing concern over the entry and spread of the Omicron Covid strain in India.

The new rules include mandatory tests for these passengers - they cannot leave the airport without the results being declared. A negative test will have to be followed by seven days of home quarantine.

Maharashtra has ordered mandatory seven-day institutional quarantine for all passengers from nations on the Health Ministry's 'at risk' list, which includes the United Kingdom and countries in mainland Europe, South Africa, Botswana, Brazil, Bangladesh, Hong Kong, Israel, and New Zealand.

Passengers arriving from 'at risk' countries will have to isolate at designated hotels at their own cost - a rule that was announced late last night, when several international flights were mid-air. They will also be required to take three RT-PCR tests - on the second, fourth, and seventh days after arrival.

Two per cent (earlier five per cent) of those from countries other than those deemed 'at risk' will be given PCR tests on arrival; if these are negative, they will still have to home quarantine for two weeks.

A positive test in either case will see the passenger shifted to a hospital for treatment.

Further, all international passengers travelling to the state must submit a declaration listing the countries visited in the last 15 days, which will be cross-checked by immigration; incorrect information will make them liable for action under the Disaster Management Act

Similarly tight screening rules have been enforced in other airports, including at the Indira Gandhi International Airport in Delhi. All international arrivals will be tested for COVID-19, with a negative result allowing them to leave the airport but still follow home quarantine protocols for seven days.

At Chennai, passengers from 'at risk' nations will be tested and can only leave on a negative result. Two per cent of those from other countries will be tested too, although they can leave without having to wait for the test results.

Existing tests - both rapid antigen and PCR - can pick up signs of Covid even if the infecting strain is Omicron, the government told states and UTs yesterday, urging them to ramp up testing.

Health Minister Mansukh Mandaviya yesterday told Parliament the Omicron variant is not yet in India. However, a senior doctor at the government-run ICMR told NDTV the strain is likely already here.

Omicron - designated a 'variant of concern' by the WHO - is believed to have 50+ mutations, including over 30 on the spike protein, which makes it considerably more infectious than other known variants.

Researchers are still determining if this is more lethal, and if current vaccines protect against Omicron.