"Convey My Best Wishes To POTUS": PM On Meeting US Defence Secretary 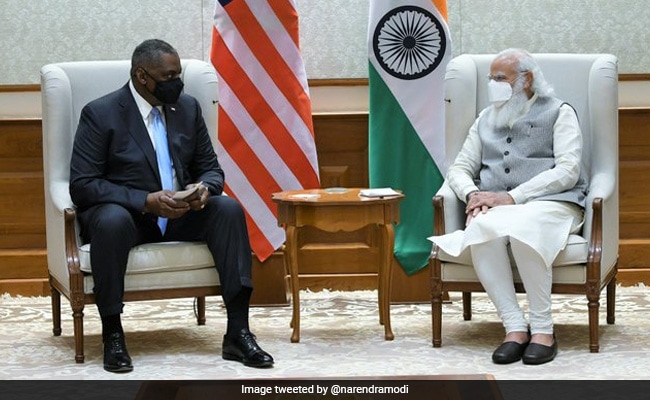 Prime Minister Narendra Modi and US Defence Secretary Lloyd J Austin met on Friday after the top Biden administration official arrived in India on a three-day visit. India is the third stop for Mr Austin during his three-nation hop - he went to Japan and South Korea - and the first overseas visit by the new US Defence Secretary after President Joe Biden took charge.

"Pleasure to meet US @SecDef Lloyd Austin. Conveyed my best wishes to @POTUS @JoeBiden India and US are committed to our strategic partnership that is a force for global good," PM Modi tweeted, along with a photo showing him and Mr Austin seated in front of the US and the national flag.

Pleasure to meet U.S. @SecDef Lloyd Austin today. Conveyed my best wishes to @POTUS@JoeBiden. India and US are committed to our strategic partnership that is a force for global good. pic.twitter.com/Z1AoGJlzFX

"Thrilled to be here in India. The breadth of cooperation between our two nations reflects the significance of our major defense partnership, as we work together to address the most pressing challenges facing the Indo-Pacific region," Mr Austin tweeted.

"Secretary Austin commended India's leadership role in the Indo-Pacific and growing engagement with like-minded partners across the region to promote shared goals. The two sides reaffirmed their commitment to promote a free and open regional order.  Both sides exchanged perspectives on shared challenges confronting the region and committed to further strengthen their broad ranging and robust defence cooperation," the US said in a statement.

During talks between Mr Austin and Indian officials, the issues that are likely to be discussed include ways to accelerate India-US strategic ties, boosting cooperation in the Indo-Pacific, China's behaviour along the Line of Actual Control in eastern Ladakh, terrorism and the Afghan peace process.

India's plan to buy some 30 armed Predator drones from the US for all the three services at an estimated $3 billion is expected to figure in the talks. The Predator-B drones made by US defence firm General Atomics can remain airborne for 35 hours and hunt targets at land and sea.

One thorny issue expected to come up is India's planned purchase of Russian S-400 air defence systems which under US law can attract sanctions. Washington has imposed sanctions on Turkey for buying that equipment.

India's plan to buy 114 fighter jets for $18 billion could also figure in the talks as American defence majors - Boeing and Lockheed-Martin - are eyeing it, news agency PTI reported.

"Walking With Mantra To Give Preference To Underprivileged": PM Modi