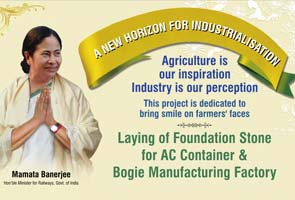 Kolkata: A railway ad in Kolkata newspapers has drawn sharp criticism from the CPM because it contains the Trinamool party's latest poll slogan.

The advertisement for the Railways in papers in West Bengal brandishes this slogan:  'Agriculture is our inspiration, industry is our perception.'

The tag line was coined by Railways Minister Mamata Banerjee and used by her on Monday at a rally for her party, the Trinamool Congress (TMC).

The Trinamool, CPM alleges, is using the Railways to promote the party's poll pitch. "The railway advertisement is an advertisement for her party. They are running it. Often, stages are made by the railways which spends the money but it is used as a party platform, " said CPM's secretary Biman Bose

The Trinamool has refused comment on the issue, saying railway ads were the railway's business and not the party's. The railways pleaded ignorance about Mamata Banerjee's political slogan. That it was the same as the railways ad's, they said, was mere coincidence.

But the CPM is not letting the issue go and plans to take it up with the Prime Minister himself.
Comments
Eastern Railways adMamata advertisementRailways MinisterTrinamoolCPM