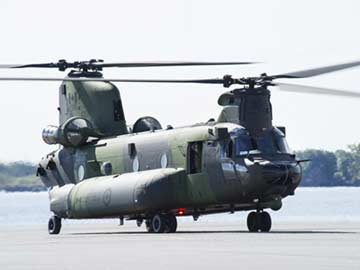 The first helicopter is likely to be handed over to India in the next three to four years.

"The contract for the purchase of 22 Apache and 15 Chinook helicopters were signed here today," Defence Ministry spokesperson Sitanshu Kar said.

The contract has a clause to place follow-on orders for 11 more Apaches and seven extra Chinooks.

The helicopter deal has survived over 10 price validity extensions from the American side with the last one being for a month as desired by India.

While the Chinook helicopter deal is a direct one with the US firm, the one for Apache is a hybrid.

A part of the Apache deal was signed with Boeing for the helicopter and the other with the US government, under Foreign Military Sales route, for its weapons, radars and electronic
warfare suites.

Sources said the total cost of the contract will be around USD 3 billion.

Defence Minister Manohar Parrikar had last week said that the contract, which will have a 30 per cent offset clause, will bring in business worth about USD 1 billion for the Indian defence industry.

Offset policy was first introduced as part of the Defence Procurement Procedure or DPP, 2005, under which a foreign company has to invest back a portion of the deal into India.

The Cabinet Committee on Security had on September 22
cleared the deal which had been hanging since 2013 when the
cost negotiations were completed.

Many in the defence sector had expected the deal to be signed during the visit of US Defence Secretary Ashton Carter in June this year.

The US has been pushing for this contract as it will further bolster American presence in the burgeoning defence market of India.

American companies have over the last decade bagged defence contracts from India worth around USD 10 billion, including for aircraft like P-8I maritime surveillance planes, C-130J 'Super Hercules' and C-17 Globemaster-III in the transport category.

Both platforms, which have been in combat in Afghanistan and Iraq, had beaten off competition from Russia which had offered its Mi-28N Night Hunter and Mi-26 heavy-lift copters.

The 22 Apache AH 64D Longbow helicopters are one of the most advanced multi-role combat helicopters, featuring all-weather and night-fighting features, ability to track upto 128 targets in less than a minute and engage with 16, besides stealth characteristics, advanced sensors and beyond visual range missiles.

India will also be acquiring Hellfire missiles and rockets.