Consensus Needed Among Parties On "One Nation, One Poll": Election Chief

Sunil Arora said simultaneous elections were in practice in the country till 1967, before a "cyclic imbalance" was created due to dissolution of some state assemblies, among other reasons. 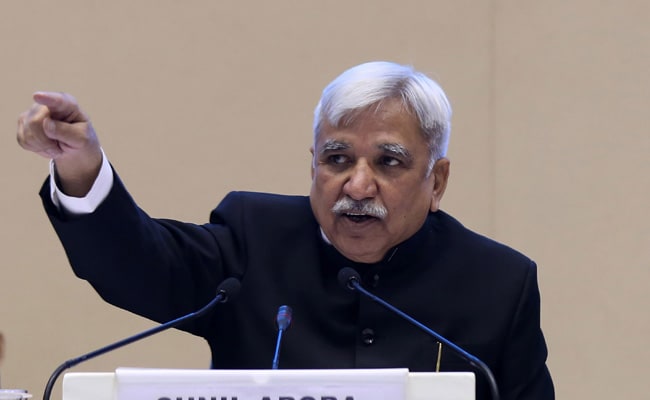 Simultaneous polls, or ''one nation, one election'', was "not happening very shortly" unless political parties sit together and evolve consensus and bring about requisite amendments in law, Chief Election Commissioner Sunil Arora said on Saturday.

This is not something in which the Election Commission could do much except saying it would also prefer such an arrangement, he added.

"And this is not a bureaucratic statement, just saying we agree in principle, etc. However, it is for the political parties to sit together and evolve some consensus, do the requisite amendments in law so that the (election) cycle can be brought together," Mr Arora said.

"Unless that is done, it is kind of a good thing to talk at seminars, but it is not happening very shortly," Mr Arora said at a function.

He said simultaneous elections were in practice in the country till 1967, before a "cyclic imbalance" was created due to dissolution of some state assemblies, among other reasons.

The CEC also asserted that Electronic Voting Machine (EVM) cannot be tampered with, despite claims to the contrary from some people.

"I would like to say to all of you responsibly as the CEC of the country that EVMs cannot be tempered with. They can malfunction, like your car or two-wheelers, but they cannot be tampered with," he asserted.

Mr Arora said "eminent scientists" working on EVMs and VVPATs for the Election Commission "feel very unhappy and deeply anguished that after all this work, the integrity of the VVPAT and EVMs gets doubted".

"We sound quite irrational when we talk about EVMs in this manner (that it has been tampered with, etc.)," he said.

The CEC cited results of various polls since 2014 to buttress his point that EVMs cannot be tampered with.