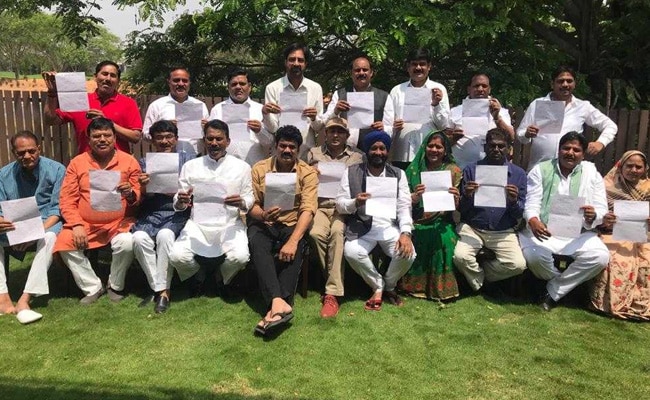 The Congress has filed petitions before Madhya Pradesh Assembly Speaker NP Prajapati seeking disqualification of the six ministers of the Kamal Nath Cabinet as MLAs who, along with 16 MLAs, resigned on Tuesday, endangering the state government.

The six separate petitions against the ministers - Mahendra Singh Sisodiya, Imarti Devi, Tulsi Silawat, Prabhuram Chaudhary, Govind Singh Rajput and Praduman Singh Tomar - were submitted to the Speaker by Congress leader JP Dhanopiya under Article 191(2) of the Constitution, which states that a person shall be disqualified as Member of Legislative Assembly or Legislative Council if she is disqualified under the Tenth Schedule.

"As per the Tenth Schedule, a member gets disqualified if that member has voluntarily given up the membership or not followed the whip of the party," Mr Dhanopia told NDTV.

"These six ministers are members of the Congress party, who won the assembly polls in 2018 on Congress's poll symbol. But they are now colluding with the BJP, so separate petitions have been filed seeking their disqualification from the House," he added.

The Congress has 120 MLAs in Madhya Pradesh, four more than the majority mark of 116 in the 230-member assembly. If the resignations of 22 MLAs are accepted, the majority mark will fall to 104. This will make it easier for the BJP - with 107 MLAs - to stake claim to power.

Speaker NP Prajapati, however, said the MLAs will have to submit their resignation letters in person.

"As per the law, those resigning will have to first appear before the Speaker personally, after which only I will look into the available evidences/facts before deciding as per merits of the case," he told NDTV.