Congress members have been raising the Rafale deal issue since the start of the Winter Session of Parliament on December 11, demanding that a Joint Parliamentary Committee (JPC) should probe the matter. 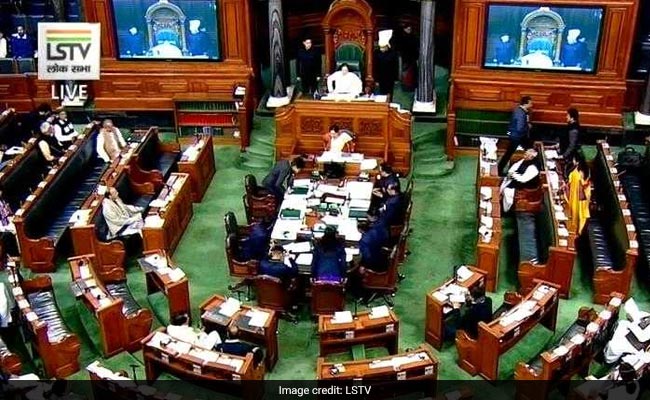 Congress demanded a JPC probe into the issue amid loud protests from BJP members.

A belligerent Congress on Monday again sought to raise the issue of alleged scam in the Rafale deal in the Lok Sabha, with Home Minister Rajnath Singh saying that repeating a lie would not make it a truth.

Congress members have been raising the Rafale deal issue since the start of the Winter Session of Parliament on December 11, demanding that a Joint Parliamentary Committee (JPC) should probe the matter.

During the Zero Hour, party members trooped into the Well displaying placards and shouting slogans on the matter.

Raising the issue, senior Congress leader Mallikarjun Kharge said there has been a scam in the deal and asked why the government was not disclosing the price of jets.

He also demanded a JPC probe into the issue amid loud protests from BJP members.

In response, Mr Singh said repeating the same lie again and again would not make it a truth.

The government is ready for discussion on the matter but why is the Congress running way, the minister asked.

UPA Chairperson Sonia Gandhi was present in the House.

The Opposition has also been raising the issue outside Parliament.

Besides, members from the AIADMK and the TDP engaged in sloganeering in the Well as they sought to raise various other issues.

While the AIADMK demanded that construction of a dam across the Cauvery river should be stopped, the TDP continued to seek special status for Andhra Pradesh.

Over 20 members from the Congress, the AIADMK and the TDP were in the Well during the Zero Hour.

Despite the din, many members raised various issues.

PDP member Muzaffar H Baig said there has been a steep rise in killing of civilians in Jammu and Kashmir even as he acknowledged that security forces are working in a difficult environment.

Prem Singh Chandumajra (SAD) raised the issue of poor law and order in Punjab and referred to recent local polls where police, he alleged, was used to scare away voters.

Congress members were heard objecting to him being allowed to raise a state issue.

BJP's Anurag Thakur spoke about monkey and stray cattle menace in Himachal Pradesh and said they were harming crops.

Kaushalendra Kumar (JD-U) demanded that all people above the age of 60 should be given pension.

Rama Devi (BJP) raised the issue of dues of sugarcane farmers pending in her constituency, Sheohar, and sought steps to ensure farmers are paid their dues.

Nishikant Dubey (BJP) demanded Assam-like National Register of Citizens in Jharkhand as well, saying the presence of illegal Bangladeshi immigrants has impacted demographic balance in parts of the state.

Sharad Tripathi (BJP) demanded that a cancer treatment hospital be opened in Sant Kabir Nagar due to rising number of cancer cases.