Congress Protests In Jammu And Kashmir Amid Nationwide Bandh Call 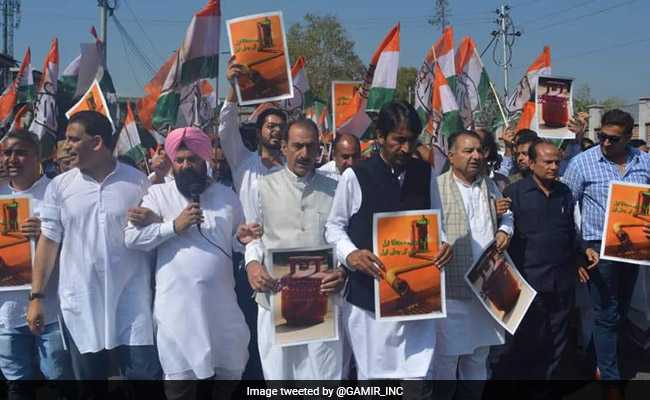 Party workers marched on the busy MA Road towards the Dalgate area of Srinagar.

The Jammu and Kashmir unit of the Congress on Monday staged a protest in Srinagar, as part of the party's call for 'Bharat Bandh' against rising fuel prices. The call did not affect normal life in Kashmir

Party workers, led by Jammu and Kashmir Pradesh Congress Committee (JKPCC) president Ghulam Ahmad Mir and other senior leaders, assembled at the party headquarters at MA Road in the heart Srinagar to begin the protest.

They marched on the busy MA Road towards the Dalgate area of Srinagar, shouting slogans against the BJP and Prime Minister Narendra Modi-led central government. The march caused inconvenience to people, disrupting traffic during the morning rush hour.

Speaking to reporters, Mr Mir demanded reduction in taxes for the benefit of people.  "The prices of petroleum products are sky-high, something which the country had never witnessed before. The prices of crude oil have dropped about 40 per cent since 2014, but despite that there has been no reduction of the prices for the customers in the country", he said.

"The taxes collected by Modi and his state governments are over 100 per cent more than the original prices. We demand that the taxes be reduced so that there is some benefit to the common people. If you do not wake up now and control the prices of the petroleum products, then the people will remind you of the promises you made in 2014," Mr Mir added