Congress presidential election: Some 9,000 delegates will vote for a new Congress chief in the election starring Mallikarjun Kharge and Shashi Tharoor as the main candidates. 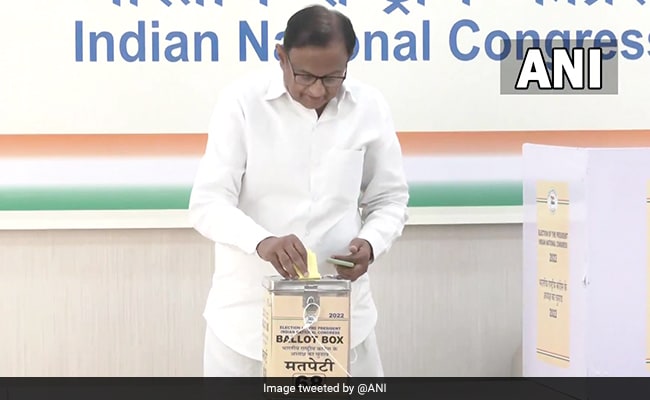 P Chidambaram was seen casting his vote by secret ballot at the Congress headquarters.

As voting began this morning for the Congress' first election in over 25 years, P Chidambaram was the first to cast his vote at the party's office in Delhi. The former Union Minister was seen casting his vote by secret ballot at the All India Congress Committee (AICC) headquarters.

Some 9,000 delegates will vote for a new Congress chief in the election starring Mallikarjun Kharge and Shashi Tharoor as the main candidates.

For Mr Chidambaram, it was his first-ever vote in an internal election for party president; he was not in the party during the polls in 1997 and 2000.

This is the sixth actual election in the 137-year-old party after Independence. Members of the Gandhi family have mostly been elected unopposed.

Amid criticism of their leadership because of election defeats, the Gandhis have refused to get involved this time and have asserted that a non-Gandhi should take charge.

This election is being held three years after Rahul Gandhi quit as Congress president after the Congress's second straight election defeat in 2019. The 52-year-old, who is currently leading the party's "Bharat Jodo" yatra, firmly refused to return as president despite appeals from party leaders. Both he and mother Sonia Gandhi, who served as Congress president for 19 years and is interim chief, have said they will stay neutral.

Mr Chidambaram is among the leaders in the party who backed internal elections as part of much-needed reforms within the Congress.