We Will Win 135 Seats In The 2022 Gujarat Elections: Rahul Gandhi 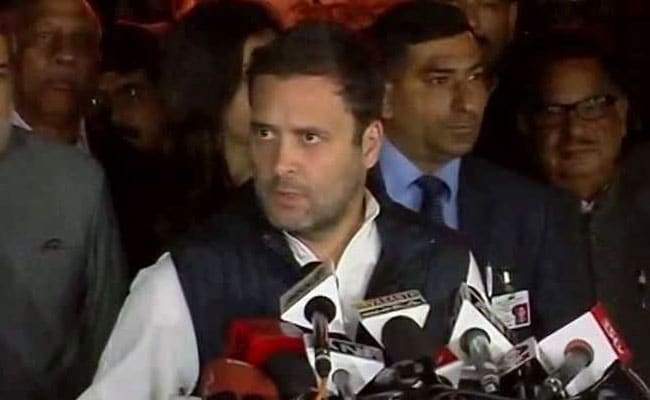 "You fought very well. We managed to 'gherao' the BJP, as you could see that they were not able to give reply to our questions," Mr Gandhi told party workers.

"Modiji, in the end, spoke about himself, about (former prime minister) Manmohan Singh. But all earlier talk about development and Modi model was debunked by Congress workers and the people of Gujarat," he said.

"The entire country was asking what happened to the Gujarat model. Modiji would not be able to talk about it in the future," Mr Gandhi said.

"The question asked three or four months ago was can the Congress fight elections, nobody was talking about us winning it. The Gujarat Congress has shown the entire country that if it fights in one voice on the basis of its ideology, it won't get defeated," he said.

"We lost in the elections, but we won. That is the reality. We won because they (the BJP) fought with anger, they had all the equipment, money, chief ministers of different states (to campaign), industrialists, but we had truth," the Congress chief said.

At one time the BJP said the Congress would get only 15- 20 seats, he said, adding the "new leadership" in the Assembly would bring the Congress to power in Gujarat in 2022.

Mr Gandhi alleged PM Modi and the BJP ran a campaign of "lies and defamation" over the last two decades and it was the "main reason" for the Congress's defeat in the polls.

"My main challenge was to make the Congress accept that it was going to win the elections. You believed 70 per cent of it, and you saw the results," he said.

"Now, the Gujarat Congress has regained confidence. You know that the Congress can win elections. Now see the kind of results we will get in the Lok Sabha and next Assembly (polls). It will be a good result, and in the next Assembly we will form the government," Mr Gandhi said.

Action will be taken against "5-10 per cent" renegade party workers while those who worked with devotion will be rewarded, the Congress chief said.

"You have to show the people of Gujarat that Congress MLAs fight for people's issues and never backtrack. Whatever we had said about the Gujarat government during the election is true and the fight has not ended yet," Mr Gandhi said.

"The BJP will run the government of five-ten industrialists and will work to snatch lands from farmers. It is our duty to protect the people of Gujarat, its farmers and youths...We will give a fight to the BJP at every level," the Congress president said.

The reasons cited by the leaders included late declaration of candidates, lack of management at the local level and lack of state-level coordination, party sources said.

Promoted
Listen to the latest songs, only on JioSaavn.com
Some leaders also blamed OBC leader Alpesh Thakor over his choice of some candidates, sources said.

In the morning, Mr Gandhi visited the Somnath temple in Gir Somnath district.