Congress party believes in divide and rule, must be shown the door, says Narendra Modi at Mumbai rally: Highlights 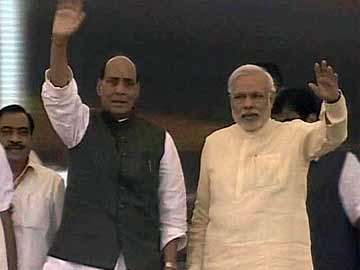 Below are the highlights:

I want to salute Maharashtra, BJP, Mumbai BJP and all its workers.

Mumbai is like a second home to us Gujaratis.

Before 1960, we belonged to one state. Maharashtra is like our elder brother. Gujarat is the younger sibling.

But when the two states separated, there were questions on how Gujarat will develop. Gujarat doesn't have natural resources or industry and was located between a desert (Rajasthan) on one side and Pakistan on the other.

But today, Gujarat has scaled new heights in prosperity and development.

Even media seems to have ignored this fact. 1 May 1960, Gujarat started its journey as an independent state. Maharashtra did so too on the same date.

In these years, Gujarat had 14 Chief Ministers. But in Maharashtra, 26 Chief Ministers were elected. Now tell me, what kind of politics would this state be having.

This reflects the character of the Congress government. If we don't understand it, the country's problems will not be solved.

The root cause of the problems of India are not its people or its geography or its history or its natural resources. It is Congress-led governments.

India has to be rid of Congress.

It was Mumbai, that the August Kranti movement started. It was this movement that got India freedom.

It was Mumbai, that the August Kranti movement started. It was this movement that got India freedom.

Today, from the same Mumbai, we need to hear cries of 'Congress-free India'

Divide and rule has been the special feature of the Congress politics.

BJP has shown through its politics and policies that it is committed to development. Without development, India's poor and exploited won't be able to live.

We have Madhya Pradesh as our neighbour. I don't want to talk about Gujarat so much as it irritates some.

Agriculture progressed in Madhya Pradesh under the BJP government. There was a time when Punjab and Haryana were considered the topmost agrarian states of India with high agricultural production. Today, wheat and rice have seen historic output in Madhya Pradesh.

What is the reason that in Maharashtra, farmers are forced to commit suicide?

I am here to tell you that under a BJP government such a tragedy would have never occurred. Our farmers would not die or commit suicide.

Yesterday I listened to the speech of a very big Congress leader (refers to Rahul Gandhi). He was talking about ridding India of corruption.

They are all neck-deep in corruption and they make innocent faces and give speeches.

The Manmohan Singh government identified some 90 minority strongholds across India and announced special schemes for them. When asked, how much of the funds had been spent on these areas in three areas, this government said in Parliament that not a single rupee had been spent.

We have abolished octroi in Gujarat. But in Maharasthra, local body tax (LBT) was imposed instead of octroi.

LBT is nothing but loot baatne ki technique.

The ordinary citizens of India know where India's black money is.

We BJP leaders wrote to the government under the leadership of Advaniji that not a single one of us has black money in Swiss banks. Did Congress leaders write it? No.

The youth of the country live in despair. Youth should be given jobs and an opportunity to lead respectful lives.

While the world stresses on skill development, India only makes committees.

The mantra of India should be 'shramev jayate'.

The difference between Maharashtra and Gujarat checkposts is that we have technology to help us. There is minimum human intervention. But in Maharashtra, technology is not used.

The system of sifarish ails our country. The youth, no matter how qualified they are, have to depend on sifarish to get jobs.

Where will the poor man get the money from for sifarish?

We eliminated this system of sifarish using technology. We asked our youth to upload their educational details on a website and the best of them were handed teaching jobs.

Do you get power for 24 hours? Your neighbour Gujarat gets it for 365 days.

If Sardar Sarovar project is completed, we promise free power to Maharashtra.

Lokmanya Tilak had given the slogan 'Swaraj is my birthright'. The country fought, got Swaraj. Today, it is the need of the hour that we demand 'Suraaj' (good governance) again.

If we had vision and understanding, the country could have scaled new heights.

Maharashtra government made no plans to celebrate 100 years of cinema.

Promoted
Listen to the latest songs, only on JioSaavn.com
Shouldn't there be a film university in Mumbai? India is making so many films. So logically, we should have one.