Congress' Assam unit chief Bhupen Borah, who had succeeded his predecessor Ripun Borah after Congress's abysmal poll performance, was against the alliance since the beginning. 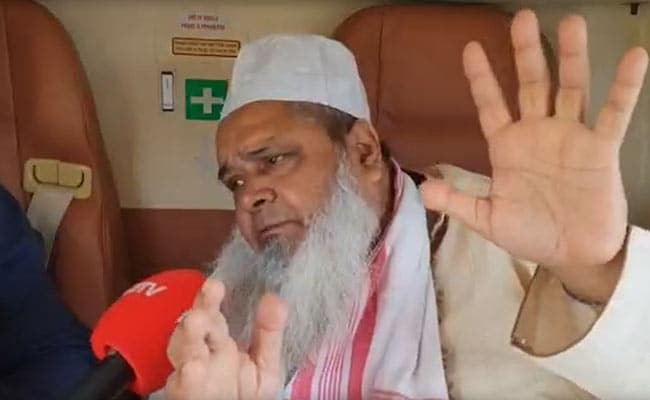 All India United Democratic Front (AIUDF) chief Badruddin Ajmal today said that "big brother Congress" has decided to end the alliance, and his party will abide by the decision.

Once arch-rivals, the AIUDF and Congress had forged an alliance ahead of Assembly elections held in March-April to form a unified force against the incumbent BJP - a move that was widely criticised both within the party and by the masses too.

"Congress is the big brother and it has decided to leave us without even asking us. But, we accept the decision," Ajmal, who is also a Lok Sabha MP, said.

He further added that it was a "political alliance" and severing ties would rather be helpful for both the parties.

Congress' Assam unit chief Bhupen Borah, who had succeeded his predecessor Ripun Borah after Congress's abysmal poll performance, was against the alliance since the beginning.

He said recently that the AIUDF has worked against the core principle of alliance.

"We have allied to fight against the divisive policies of BJP. Some AIUDF leaders praised the BJP-led government for their personal gains. One of the leaders had even supported the Taliban for its recent Afghanistan coup. This is not acceptable to us."

There were many others who also subscribed to Mr Borah's discontentment and were of the view that its alliance with AIUDF -- a party often associated with Bengali-speaking Muslims and immigrants -- has rather affected the party's performance in upper Assam region where anti-immigrant sentiments run strong.

Meanwhile, the Congress's "mahajoth" - an alliance of at least 10 parties - seem to be falling off with its only other prime ally after AIUDF, Bodoland People's Front (BPF), also announcing that it will contest the by polls on its own.

Congress in this year's assembly polls won 29 seats while its ally All India United Democratic Front (AIUDF) won 14 seats. Two sitting Congress MLAs have resigned from the assembly. While the BPF had won four seats and CPI(M) wrested one.

Party insiders, however, said that the exit of the AIUDF will open avenues for Congress to align with regional forces.

"The Congress had earlier too tried to connect with the regional political parties such as Assam Jatiya Parishad (AJP) and Peasant leader, Akhil Gogoi led Raijor Dal to the grand alliance, but born out of anti-Citizenship Amendment Act (CAA) movement, these parties showed reservation against AIUDF. With that gone, talks may come back on track," sources said.