The Muslim League, led by Muhammad Ali Jinnah, had called on Muslims to engage in direct action in support of the creation of a separate nation. 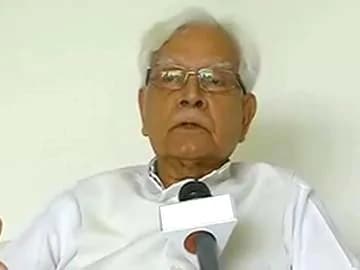 The Muslim League would not have allowed the country to function and there would have been more "direct action days" if partition had not taken place, Congress leader K Natwar Singh said on Sunday.

"In my view I am glad India was partitioned. Because if India had not been partitioned we would have had Direct Action Days -- the first we had during Jinnah's (Muhammad Ali) lifetime was on August 16 (1946) when thousands of Hindus were killed in Kolkata (then Calcutta), and of course then the retaliation took place in Bihar where thousands of Muslims were killed.

"Also, it could have been impossible for the simple reason that the Muslim League wouldn't have allowed the country to function," he said.

The Muslim League, led by Muhammad Ali Jinnah, had called on Muslims to engage in direct action in support of the creation of a separate nation. On August 16, 1946, also known as the 1946 Calcutta Killings or Direct Action Day, communal riots erupted between Muslims and Hindus in Calcutta in Bengal province of what was then the British India.

To buttress his point on Muslim League, Mr Singh gave the example of the Interim Government of India, formed on September 2, 1946, and how the Muslim League first declined to join the cabinet of the council's vice-president Jawaharlal Nehru, and later became part of it only to "turn down" all its proposals.

"Therefore you can imagine this on a larger scale, if India was not partitioned, the Muslim league would have made things very very difficult for us to function. Also, the government situation (then) would have worsened by the week," he explained.

"It would have been impossible to live with them. Because Gandhi ji standards were very high and Jinnah''s temperament was so abrasive that I certainly wouldn't have got on with him," the 88-year-old said, adding that he must be the only one in the audience who saw Mr Gandhi in flesh and blood.

He was of the view that it was Gandhi who pampered Jinnah on the persuasion of India's last Governor General C Rajagopalachari.

"In many ways, and it is my judgement, that Gandhiji pampered Jinnah. In 1944, Gandhi visited Jinnah''s house in Malabar Hill 17 times. But not once did Jinnah return his visits."

Low Pressure In Bay Of Bengal, Odisha Likely To Get Moderate Rain On Dussehra