In his 27-minute speech in Hindi, the Prime Minister said the Congress and the Left parties were fighting against each other in Kerala and Tripura, but maintaining friendship in Delhi. 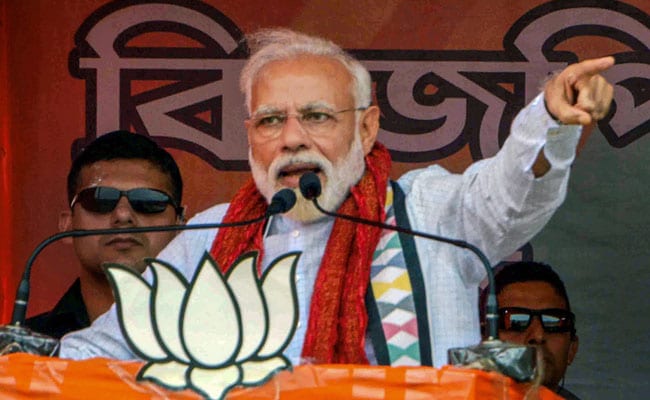 Prime Minister Narendra Modi on Sunday said the Congress wanted to punish people belonging to the middle class and had not mentioned them in their manifesto.

"The Congress is keen to punish the middle class people as they are supporting the Bharatiya Janata Party (BJP). That's why the Congress did not mention them in its manifesto," PM Modi said at an election rally, 60 km from Agartala.

He accused the Congress of planning to burden the middle class with more taxes and said the manifesto had nothing for them. "With more tax burden, the Congress wants to bring back the 'licence raj'. When the BJP government is trying to reduce the tax burden of the people, the Congress is eager to raise it."

In his 27-minute speech in Hindi, the Prime Minister said the Congress and the Left parties were fighting against each other in Kerala and Tripura, but maintaining friendship in Delhi.

Terming their electoral battle against each other just a show, PM Modi said they were fighting against the country's chowkidar Narendra Modi. All the parties, like Pakistan, were against the chowkidar "who is killing terrorists," he said.

He also demanded to know why Congress President Rahul Gandhi was contesting from a Kerala seat and not from any other states. "He (Gandhi) would not contest from Punjab as the Congress has committed many offences in the state," he said.

Addressing the gathering, he said, "I sincerely thank you for ending the 25-year-rule of the Left in the Assembly elections in 2018. This time if you cast your vote for 'lotus' it would go to the account of Narendra Modi."

PM Modi on Sunday addressed rallies in West Bengal, Tripura and Manipur to make a strong pitch for the BJP in the Lok Sabha elections.

Tripura and Manipur, ruled by the BJP, account for two Lok Sabha seats each. Polling in these four constituencies will be held on April 11 and April 18.

Highlighting the BJP's performance and initiatives for the all round development of tribals, remote and rural areas and workers of the unorganised sector, the PM said wherever the Left parties ruled they prompted political violence.

"The Left parties and the Congress are only creating miseries for the people. Poor people now (under the NDA rule) get concrete houses, free cooking gas connections, adequate treatment support through the 'Ayushman Bharat' scheme and electricity connections."

He praised the one-year-old BJP government, led by Chief Minister Biplab Kumar Deb, for developing and improving the law and order situation in the state.

"Tripura is connected with the rest of the country through broad gauge rail. The double engine of the 'lotus' would develop Tripura more. The BJP government at the Centre has given more powers to the Tribal Autonomous District Council in the state," he said.